Pakistan finished their batting innings in the T20 World Cup 2022 final at the MCG at the score of 137/8 as the England bowlers did well to keep things tight throughout.

After England skipper Jos Buttler had won the toss and elected to bowl first, the Three Lions were on top of the Pakistani innings right from the start, and but for a little loosening in the middle, they mostly had the leash on.

Leg-spinner Adil Rashid was the key man for England in the middle-overs vs Pakistan in the final on Sunday, as he was in the semi-final vs India a couple of days ago in Adelaide.

Rashid put up a magnificent display of spin-bowling, turning the ball both ways and troubling the Pakistani batters, finishing with brilliant figures of 2/22 in 4 overs, which included the wickets of Babar Azam and Mohammad Haris.

Rashid now has had three superb bowling displays in consecutive games - 1/16 vs Sri Lanka, and 1/20 vs India, the last two were in match-winning causes, and England and their fans would hope this performance in the final also gives the same result. 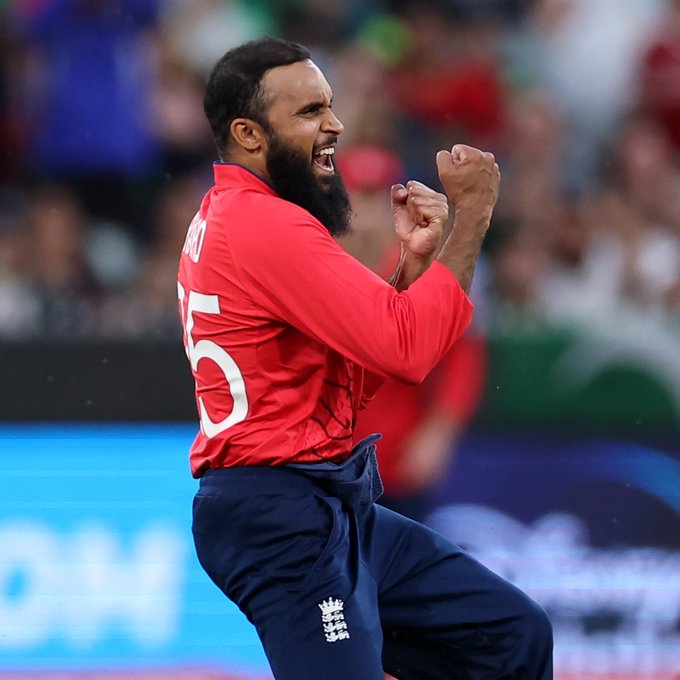 Rashid dismissed Babar Azam with a terrific caught and bowled after the Pakistani captain failed to read Rashid’s googly. Babar’s wicket came at a good time for England as Babar and Shan Masood were building a solid partnership and Babar had settled himself in.

Adil Rashid broke the stand of 39 (24) between Masood and Babar, who was dismissed for 32 (28), a kind of innings that was potentially match-losing; Mohammad Rizwan’s 15 (14) was also just poor.

On the first ball of the 12th over, Adil Rashid bowled a sharp googly to Babar. The ball not only turned considerably but also snaked onto Babar from length who failed to read it out of the bowler’s hand and was in no position to play the cut shot; there was no space either for that shot and Babar chipped back the ball which lobbed to the right of Rashid, who put in a dive to take the catch with both hands.

You can watch the dismissal of Babar Azam off Adil Rashid here: