Virat Kohli continues to rack up runs in the T20 World Cup 2022, as he had done in the past 4 editions of the tournament. Kohli hit another half-century - his fourth of the tournament - and this time in the big semi-final against England at the Adelaide Oval on Thursday.

Coming into bat after KL Rahul’s dismissal in the second over of the match, Kohli scored 50 runs off 40 balls, being in two important partnerships with Rohit Sharma and Hardik Pandya. He hit 4 fours and a six.

En route his 50 runs today, Kohli became the first-ever batsman in the history of T20Is to reach 4000 runs! Kohli was also the first batsman to reach 3000 T20I runs. Former New Zealand captain Brendon McCullum was the first batter to score 1000 and 2000 T20I runs. 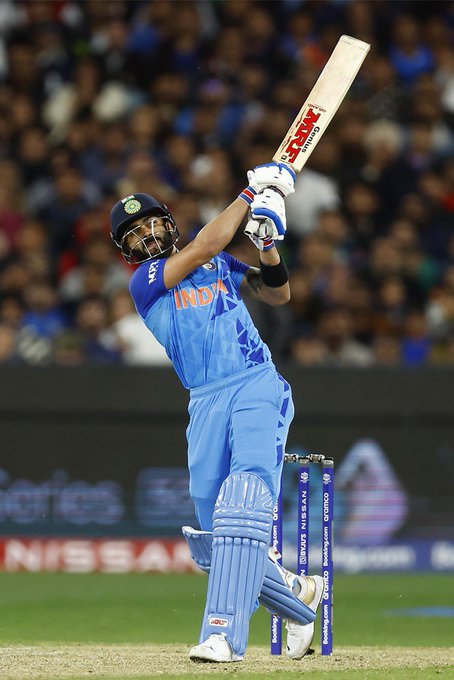 Kohli is also currently the leading run-scorer of the T20 World Cup 2022. He has amassed 296 runs in 6 knocks at a staggering average of 98; Kohli has notched up 4 fifties in 6 innings in this tournament.

Hardik Pandya gives flourish to India in the semi-final

At the fall of Kohli's wicket, India were 136/4 after 18 overs and it seemed that they would finish with a below-par score on what looked a good surface with short square boundaries. Hardik Pandya, who hasn't had the best of the times in the tournament so far with the bat, also hadn't got off the blocks strongly today, but he hung in there to give India a terrific finish.

At one stage, Pandya was 24 runs off 21 balls before he began clearing the fence with ease. Courtesy of Pandya's monstrous hitting India plundered 47 runs in the last three overs to finish at 168/6. Over to the bowlers now.