While all the other Indian batsmen couldn’t handle the South African fast bowlers on the bouncy Perth pitch, one man, Suryakumar Yadav, batted with aplomb and waged a lone battle for Team India in their Super 12 round game on Sunday against the Proteas.

In their quota of 20 overs, India could put up 133 on the board, out of which Suryakumar Yadav alone made 68 off 40 balls, striking at a terrific rate of 170 while no other Indian batsman could score more than 15!

Suryakumar Yadav  and Yuvraj Singh are the only two Indians in this list:

Suryakumar Yadav is now only the second Indian middle-order batsman to hit consecutive fifties in the men’s T20 World Cup. In the previous game, against the Netherlands, Suryakumar Yadav smashed 51* off 25 balls in India’s victory by 56 runs and bagged the Player of the Match award. 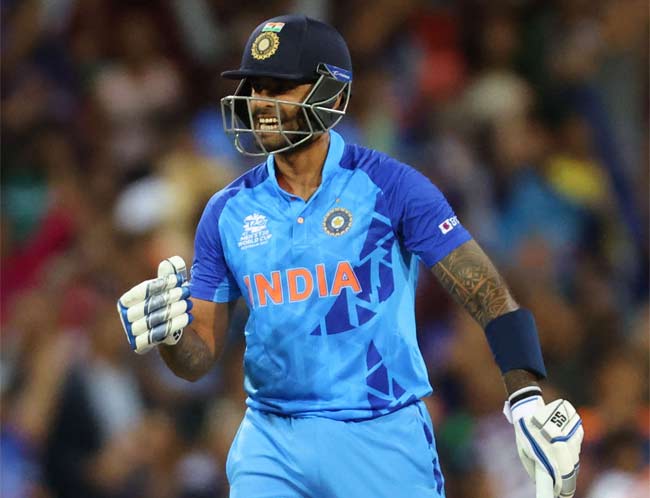 Yuvraj Singh was the first to record this feat. Back in the 2007 T20 World Cup in South Africa, Yuvraj hit two fifties in a row: 58 runs off 16 balls against England, followed by 70 off 30 against Australia in the semi-final.

India skipper Rohit Sharma won the toss and elected to bat first on the fast, bouncy Optus Stadium surface against a potent, world-class South African pace attack. The Protea seamers turned on the heat and breathed fire, having India reeling at 49/5 in 9 overs with Suryakumar Yadav left for anyone to stand with him.

Although Dinesh Karthik scores only 6 runs off 15 balls, he gave Suryakumar some support and stood with him in a partnership of 52 runs off 40 balls of which Suryakumar alone scored 44. Suryakumar raised his fifty, and played some aggressive shots toward the end. All in, he hit 6 fours and 3 sixes in his innings, taking India to 133, giving the bowlers something to bowl at.