After back-to-back fifties, against Pakistan and the Netherlands, Virat Kohli suffered a low score when he was dismissed cheaply for 12 runs against South Africa in Perth, although his 12 runs were still the third-highest score by an Indian batsman today.

India and South Africa met in a crucial Super 12 Group 2 game at the Optus Stadium in Perth where the Protea fast bowling quartet were all over the Indian batters barring Suryakumar Yadav, who waged a lone battle.

In their quota of 20 overs, India could put up 133 on the board, out of which Suryakumar Yadav alone made 68 off 40 balls, striking at a terrific rate of 170 while no other Indian batsman could score more than 15!

Virat Kohli, who registered unbeaten fifties in India’s twin wins so far in the Super 12 against Pakistan and the Netherlands could manage 12 runs today off 11 balls. Kohli was bounced out by Lungi Ngidi. Kohli had stroked Ngidi for two fours in the over, but the lanky pacer had the last laugh. A short ball climbed onto Kohli, who played the pull shot but was not in control of it, and the top edge flew toward Kagiso Rabada at fine leg. 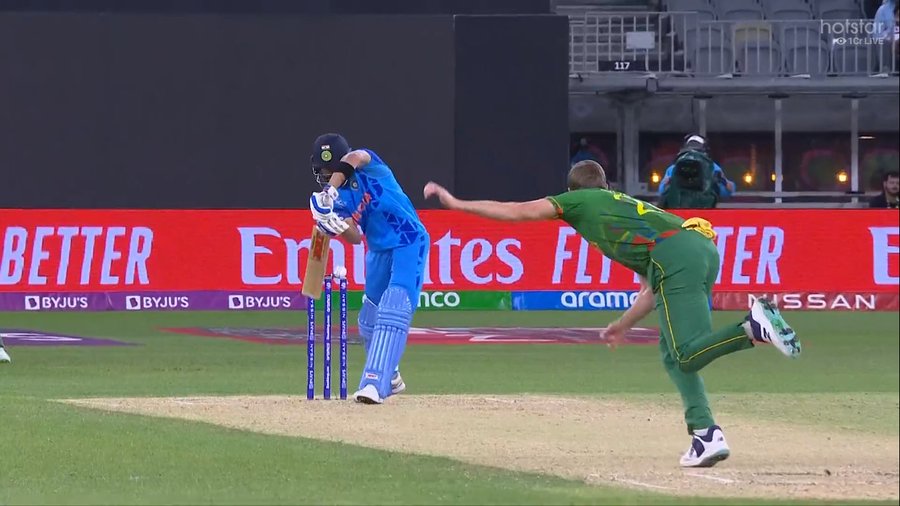 Virat Kohli completes 1000 runs in T20 World Cup, only the second-ever batsman to do so

Despite scoring only 12 runs today, Virat Kohli became only the second batsman in the history of the T20 World Cup to complete 1000 runs in the tournament. Kohli now has 1001 runs in 22 innings at a staggering average of 83. He’s notched up 12 fifties in 22 knocks in the T20 World Cup.

Only Sri Lanka’s Mahela Jayawardene is ahead of Kohli in terms of runs in the T20 World Cup. The former Sri Lankan skipper aggregated 1016 runs in 31 innings in the competition at an average of 39. Kohli is now just 15 runs behind Jayawardene’s tally, and will most certainly go past the Sri Lankan in the coming matches