Australian captain Aaron Finch shrugged off all concerns regarding his form and shut down questions over his place in the XI with a match-winning knock in a crucial, must-win encounter against Ireland in their Super 12 meeting to keep Australia’s hopes of making it into the semi-finals alive.

Finch had apparently been “out of form”, his T20I numbers though suggested otherwise.

He registered scores of 13 (11) vs New Zealand and 31* (42) vs Sri Lanka. Against Sri Lanka, Finch struggled for boundaries and hit many good shots which went straight to the fielder.

Against Ireland, the Aussie skipper started off similarly, but this time he continued batting for a longer time, eventually ending up with 63 runs off 44 balls on what he said wasn’t the easiest of the pitch and conditions to bat at the Gabba. Finch’s knock included 5 fours and 3 sixes. He batted till the 17th over, holding the innings while Marsh, Maxwell, and Stoinis rallied around him with their powerful hits to and over the fence.

Australia ended up with a total of 179, which turned out 42 runs more than what Ireland could manage, courtesy of a valiant 71 from Lorcan Tucker. 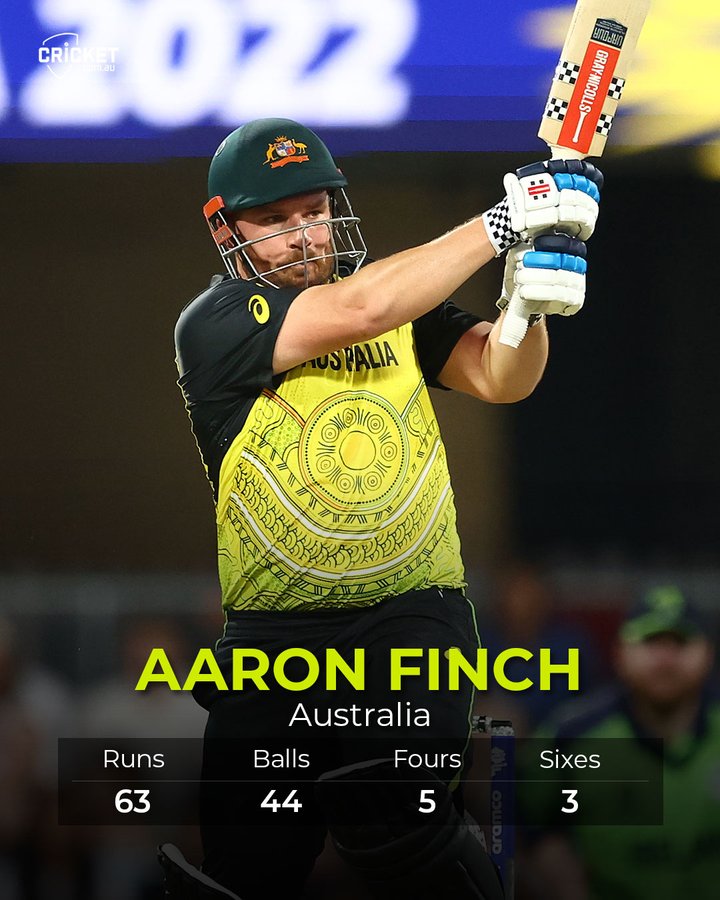 Aaron Finch’s wife, Amy Griffith, took to Twitter to react on the Aussie captain’s brilliant match-winning performance with the bat.

After Australia defeated Ireland, Sri Lanka defeated Afghanistan and England hammered New Zealand to keep all possibilities open in the Group 1 ahead of their last group match. England and Australia both now have 5 points in 4 matches, but England’s NRR of +0.547 is considerably better than Australia’s -0.304.

England take on Sri Lanka in their last group game while Australia meet Afghanistan. Both the teams are favorites to win, and then it will boil down to NRR. Further, England have the advantage here because Australia will play Afghanistan a day before the England-Sri Lanka game.