India inched closer to a semi-final spot by defeating Bangladesh by 5 runs (DLS) in a thrilling last-over encounter that was cut short by rain in Adelaide.

With this victory, India moved to the top of the Group 2 points table, having gained 6 points. With their next game against Zimbabwe, India are firm favorite to defeat Sean Williams’ side and that will seal their place in the semis. 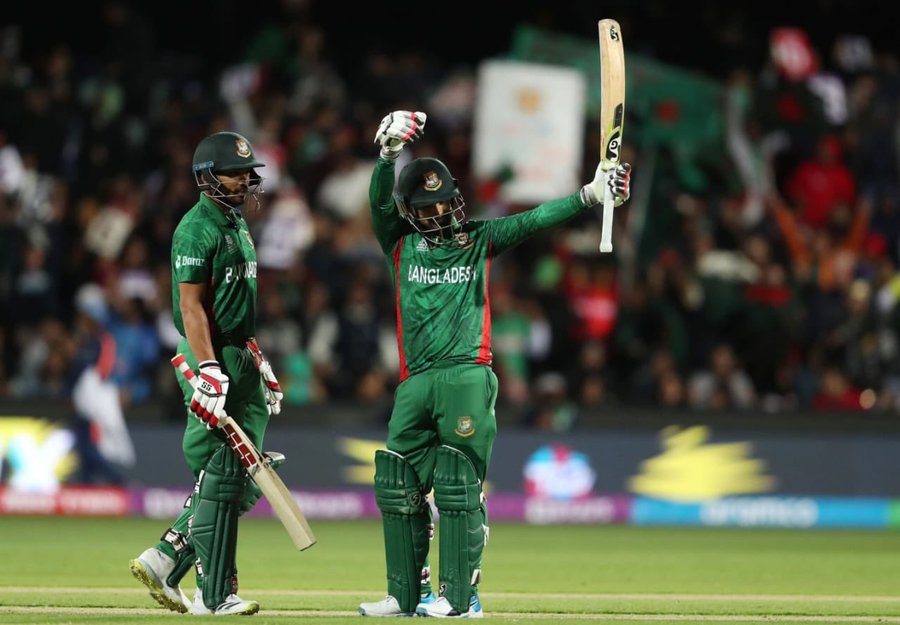 After the game, in a sweet gesture, Virat Kohli gifted a bat to Bangladesh opener Litton Das, who had played a spectacular innings of 60 runs off 27 balls in the chase of 185 and gave India an almighty scare.

Das had rumbled on to a 21-ball half-century and was teeing off in a stunning fashion. He propelled Bangladesh to 66/0 in 7 overs before rain intervened. After a delay of almost an hour, play resumed with a new target for Bangladesh of 151 in 16 overs. Only on the second ball after the play resumed, Litton Das got run out via a terrific direct hit from KL Rahul in the deep.

Indian bowlers rallied together with assistance from the fielders and eventually pulled off the game with just 5 runs.

Getting a bat as a gift from Kohli was a “moment of inspiration” for Liton Das.

“When we were sitting in the dining hall, Virat Kohli came and gifted a bat to Litton. According to me, it was a moment of inspiration for Litton,” Bangladesh Cricket Board (BCB) cricket operations chairman Jalal Yunus was quoted as saying by BDcrictime Bangla. “Litton is a class batter. We have seen him play classical shots. He is a brilliant player in Tests and ODIs. Recently, he has started playing well in T20Is as well,” he added.

Virat Kohli gifted one of his bat to Liton Das after the Match at Adelaide♥️@imVkohli pic.twitter.com/35CZzleVVz

Virat Kohli hit his third fifty of the tournament in 4 matches, scoring 64* off 44 balls, and was named the Player of the Match.