India are one step away from the semi-final of the T20 World Cup 2022. Rohit Sharma’s side has won 3 out of their 4 matches and sit at the top of the points table.

India will next face Zimbabwe and a win will keep them at the top of the points table, which also means they would not have to face New Zealand in the semi-final. However, a loss - and that would be some upset if Zimbabwe defeats India - is likely to eliminate the Men In Blue from the semis race.

India’s success in the T20 World Cup 2022, and in the year throughout in the shortest format, must significantly be credited to Suryakumar Yadav and Virat Kohli, the pair have lit up the fans with their enthralling partnerships in the last couple of months.

While SKY has been batting on another planet since his India debut last year, Kohli has regained his form, and is even indeed playing at his best, after looking a pale shadow of himself in the past couple of years. 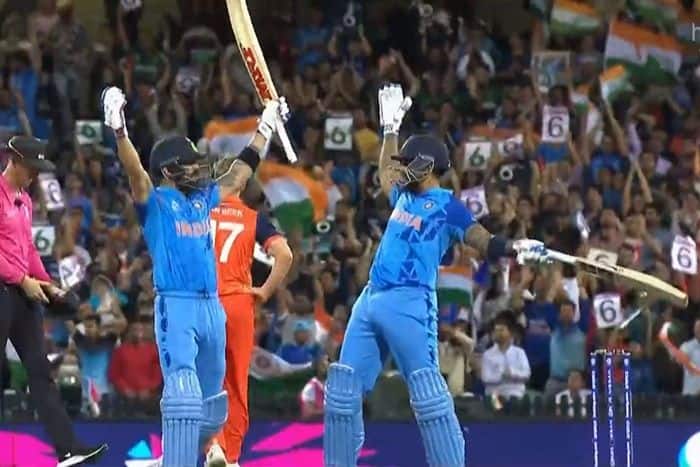 Only three Indian batting pairs have recorded over 500 T20I runs together in T20Is. None of them had an average or strike rate better than what Virat Kohli And Suryakumar Yadav - the ‘SurVir’ of the Indian team - have managed this year.

Shikhar Dhawan and Rohit Sharma when at their best as openers scored 621 runs in 2016 at an average of 34 and scoring run rate of 7.91 - reflecting the conservative approach India used to have in the past years.

Rohit Sharma and KL Rahul, the opener pair after Rohit-Dhawan, scored 516 runs in 2021 at an average of 57 and run rate of 8.92, but the pair failed to deliver in the crucial matches of the T20 WC last year.

Talking about ‘SurVir’ - Virat Kohli And Suryakumar Yadav have plundered 516 runs in 9 innings together at a terrific average of 64 and run rate of 11.21 (which is a strike rate of 186!) - scoring big and scoring quickly.

India's hopes of coming back from Australia with a trophy lie largely on the 'SurVir'.