India’s talented keeper-batter Rishabh Pant showed great maturity as he scored a counter-attacking hundred in South Africa to help the Indian cricket team extend their lead in the ongoing third and final Test match in Cape Town. Now with the three-figure mark, Rishabh Pant has achieved a special milestone by becoming the only keeper-batter to …

India’s talented keeper-batter Rishabh Pant showed great maturity as he scored a counter-attacking hundred in South Africa to help the Indian cricket team extend their lead in the ongoing third and final Test match in Cape Town. Now with the three-figure mark, Rishabh Pant has achieved a special milestone by becoming the only keeper-batter to have scored a century on the Rainbow nation and he did it a blockbuster style.

Rishabh Pant walked out to bat after team India lost a couple of wickets in Ajinkya Rahane and Cheteshwar Pujara in a span of only two overs, putting team India’s position in trouble. He showed immense fighting spirit as he played a gritty knock against South Africa. 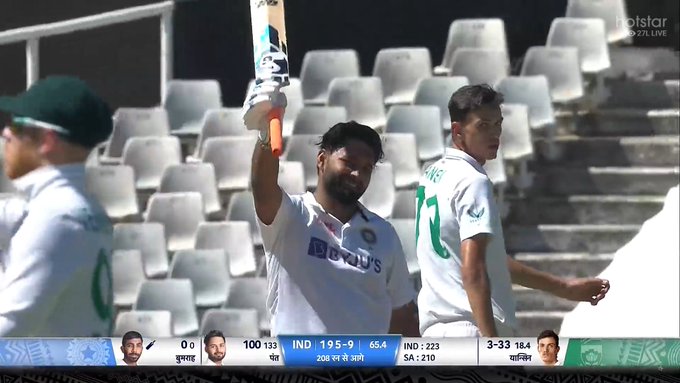 Rishabh joined Virat Kohli in the middle and provided him with crucial support. He played his shots very carefully on a fiery pitch, especially when he was under so much pressure because of criticism on his inconsistency issues.

Pant and Virat formed a partnership and pulled team India out of the troublesome situation. After the Tea, Rishabh Pant smashed Keshav Maharaj to back-to-back sixes. He eventually reached the triple-figure in off just 139 balls, smashing 6 fours and 4 sixes in his centurion knock.

Meanwhile, as soon as Rishabh Pant reached his ton, fans on Twitter went berserk and flooded it with their amazing reactions to the blockbuster performance by Pant. Several cricketers and celebrities also joined the bandwagon and hailed the brilliance of Rishabh Pant.

Here, check out the best reactions from the fans:

The reason why we keep talking so highly about #pant is the ability to play game changing innings! Brilliant ?

This is a very high quality ? under tremendous pressure by #pant . But, match-winners play their best when team needs it most. #INDvsSAF #CricketTwitter pic.twitter.com/RVEtISN5pb

#pant played to the situation and that’s what makes this knock special! These runs will add to the #SouthAfrican batter’s worry, as they have to face one of the best bowling attack in test cricket. #SAvIND

#pant will always divide opinions with his unique style. We must celebrate his uniqueness because a ? like this can make him a future great. #CricketTwitter pic.twitter.com/zh2IRBPipi

Hat tip to #Pant. His century has given India a semblance of chance to win. SA have to score 2 runs more than the 210 they made in the first innings. India need a bagful of wickets today itself

Hats off! What an incredible 100 @RishabhPant17 ?? Under pressure to pull this off is just so commendable! Total Redemption. After all that was spoke about his batting.

All upto our bowlers now! 212 in the 4th innings? What are the predictions?#SAvIND #pant

Seven goated knocks by #pant within a span of 12 months.

Only Asian wktkeeper to score a Test ? in England, Australia, and South Africa.

A selfless knock with the series on the line. Did that in ??, did in against ??????? and has done that again. pic.twitter.com/kXNnKHRLQL

Quoting Ian Chappell: " #Pant has produced 3 inns (Sydney, Brisbane, Ahmedabad) that changed the course of a Test. Most players don't contribute that many in a career." This 1 at Cape Town could be added to that list of those knocks from @RishabhPant17 . Result awaited. #SAvIND

A passage from #pant future autobiography.
“Everyone was reminding me about me making mistakes. If Gavaskar blasted me publicly, my captain Kohli also sent a message through press conference. But, I said if world could accept Sehwag and Dhoni then why not me." #CricketTwitter pic.twitter.com/fQ5pkf0HQT

Rishabh Pant- The Saviour.
This is the kind of innings we can call as 1 vs 11.
Well played champ.#Pant #RishabhPant #SAvIND #INDvsSA pic.twitter.com/h2dGdrNd9f

Rishabh Pant dominating on a fiery pitch, that too when he is under so much pressure. Be it series deciders or the final showdowns, Pant shows up when it matters the most.
Future of ICT