Shreyas Iyer’s excellent game against spin is well-known. It was once again evident during his brutal knock against Sri Lanka on Day 1 of the Bangalore Test when he scored more than one-third of the team’s total on a turning, treacherous, pitch that offered inconsistent bounce to the Lankan bowlers. Shreyas Iyer may have missed …

Shreyas Iyer’s excellent game against spin is well-known. It was once again evident during his brutal knock against Sri Lanka on Day 1 of the Bangalore Test when he scored more than one-third of the team’s total on a turning, treacherous, pitch that offered inconsistent bounce to the Lankan bowlers.

Shreyas Iyer may have missed his century by 8 runs, but his 92-run knock, which came off 98 balls and included 10 fours and four glorious sixes, received a standing ovation from the heavy  crowd at the M. Chinnaswamy Stadium for the fans knew that it had been a difficult surface to even survive, let alone bat and score runs.

Batting at number 6, Iyer came in at a score of 86/4, having just seen Virat Kohli, the master batter, rendered standstill at a ball that scooted lower than Kohli’s bat could reach. However, Shreyas Iyer wasn’t frittering around with the bad balls – and they were aplenty from the Lankan bowlers – and pounced on every err in line or length.

He cut and lofted spinners Embuldeniya and Jayawickrama for his first three boundaries before whipping the former through mid-wicket for another. Despite losing Rishabh Pant at the other end, Iyer kept on the charge- knowing that that one delivery with his name on it could be coming any time. 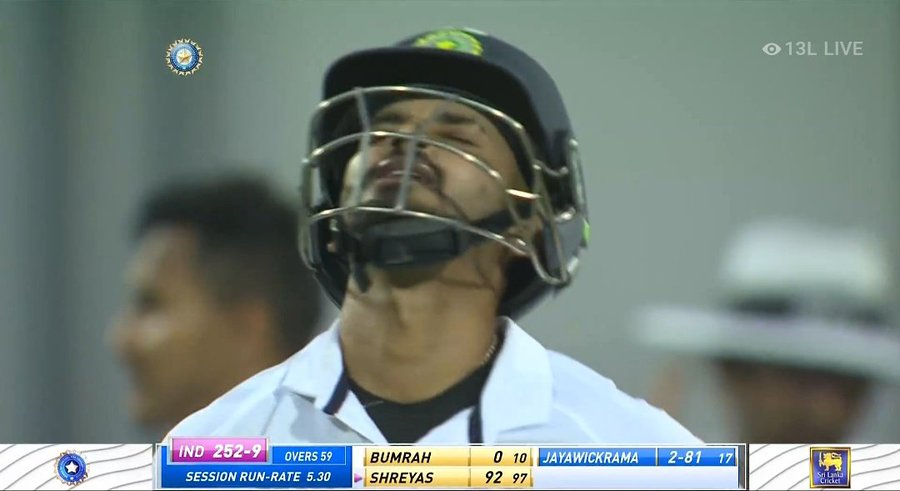 A patient steer behind square, a half-tracker being put away. Then came the big hits. With a couple of maximums running down off Dhananjaya de Silva – with the second one hitting the stadium roof – Iyer brought up his fifty off 54 balls. Took out his helmet. Bat and helmet raise, how when a batter scores a century. On this spiteful pitch, his fifty may have already won India the game.

It is also to admit that Sri Lankan bowlers were plainly awful. More long hops, full balls, poor line – Iyer punished them duly. The two left-arm spinners further conceded a six each on either side of a catch being spilt. Finally, Jayawickrama would dismiss Shreyas Iyer, when the batter jumped out of his crease again looking for his fifth six with India nine wickets down and was stumped.

Shreyas Iyer, who had hit a century on his debut Test last year, garnered all the applause from fans and experts on social media.

Here are some of the best tweets extolling Iyer’s thunderous knock:

There are test match hundreds and then there are knocks like these. Special from Shreyas Iyer??#INDvsSL #INDvSL

Well played, Shreyas Iyer – one of the finest knock in a turning pitch – India was 86 for 4 and then he scored 92 runs from 98 balls including 10 fours and 4 sixes at a strike rate of 93.88. pic.twitter.com/cROpK2U8mU

Shreyas Iyer what a player of spin? pic.twitter.com/t4agwQ7ma8

The more we criticize Shreyas Iyer, the more he shines. What a player! pic.twitter.com/3Gsl0NdUhI

It is always a better option to attack or have an aggressive mindset to score runs on difficult wickets. Exactly, how Shreyas Iyer did. Superb knock ?? #ShreyasIyer #INDvSL #TeamIndia

On a very challenging pitch where others struggled, Shreyas Iyer had a mighty knock 92 (98) – 10 fours and 4 sixes. Absolute madness.

Missed out on a very well-deserving hundred. Still, an innings to remember – very entertaining & one of the best of his career ? @ShreyasIyer15 pic.twitter.com/vGzpAeRNXW

Proper entertainment from Shreyas Iyer. Sri Lanka could have easily wrapped us up much earlier. #INDvsSL

This 92 from Shreyas Iyer on this pitch is nothing less than a 100.!Has been India's best batter in this SriLanka series.!The perfect backup of Virat Kohli in the T20 world cup oe might replace SKY too.!

Wish he reached that three figure mark, but this has been batting of the highest caliber on a difficult pitch. Stood up tall when nobody else could. Shreyas Iyer can be proud of himself? pic.twitter.com/ym0JPaTZm1

Stunning knock by Shreyas Iyer on a turning pitch, where other batters struggled. Missed out on a well-deserving century. Played some stunning shots against spinners. ?