Interestingly, the first century of the ongoing Legends League Cricket 2022 was smashed by an Indian batter. India’s opening batter Naman Ojha stole the show with his terrific batting performances as he rained fours and sixes at Al Amerat Cricket Ground against World Giants.

All thanks to his Naman’s stunning knock, the India Maharajas side was able to set a target of 210 runs against the World Giants. 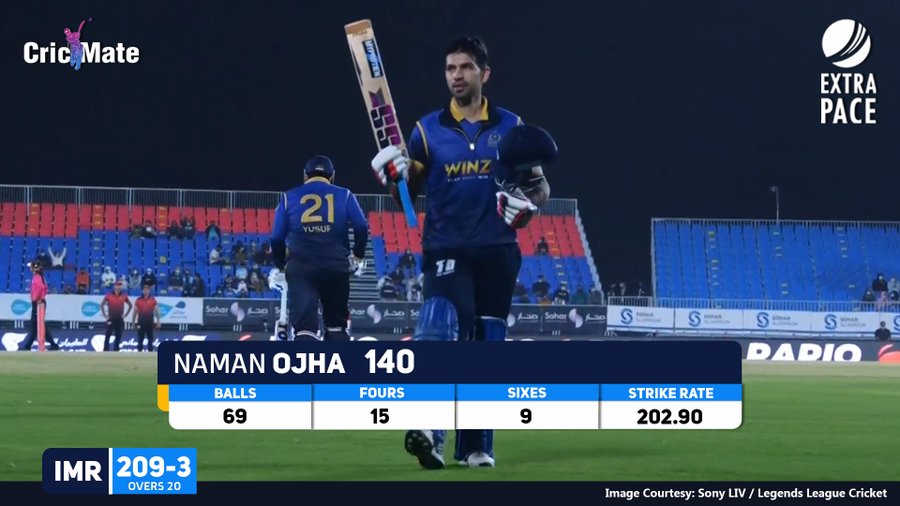 In the first match against Asia Lions, Naman had failed to make an impact with his bat, however, he made a strong comeback in the second match against World Giants. In the ongoing match, he reached the triple-figure in just 57 balls. He was dismissed by Imran Tahir after scoring 140 runs in 69 balls. His terrific knock was laced with 15 fours and 9 sixes.

Besides Naman, former Indian cricketer Mohammad Kaif completed his fifty in 44 balls. Yusuf Pathan hit a six off the last ball of the innings.

Meanwhile, as soon as Naman Ojha’s knock came to an end, social media was flooded with amazing reactions from the fans to it. From fans, experts to pundits, several people took to Twitter and hailed the batting heroics of the Indian veteran.

What a knock by Naman Ojha in Legends League Cricket. 140 in 69 balls with 9 sixes. Opened the innings and India Maharajas were 2 down for just 15 runs and from then on put on a solid innings. pic.twitter.com/7Febrc8Kdv

What an Innings from Naman Ojha. He scored 140 runs from 69 balls including 15 fours and 9 Sixes in the Maharajas in the Legends League Cricket. Incredible Innings. pic.twitter.com/grQdy9iWrh

Naman ojha gets to his century in just 57 balls.. monstrous innings with 6 sixes and 12 fours @namanojha35 #LegendsLeagueCricket pic.twitter.com/2jZf4gFqhn

And a century now. Sadly, selectors didn't fight for Naman Ojha once ? https://t.co/M5VJ4XvNTe

Naman Ojha smashed 140 runs from 69 balls including 15 fours and 9 sixes against World Giants in the Legends League cricket. pic.twitter.com/hDQaWo45az

Innings Which i Remember of Naman Ojha

What a knock by Naman Ojha in Legends League Cricket. 140 in 69 balls with 9 sixes. Opened the innings and India Maharajas were 2 down for just 15 runs and from then on put on a solid innings. This is really special Innings from an opener, First ton in this season.
Treat to eye? pic.twitter.com/ZINPezO4FS

Take a bow, Naman Ojha scored 140 runs in 69 balls, What a great knock