5 Funniest Statements Made By Rohit Sharma

Superstar India cricketer Rohit Sharma is hailed as one of the greatest ever white-ball batters, and one of the most talented batters the game has ever seen.

Sharma is in the top 10 men’s ODI run-scorers among openers and in the top 5 T20I run-scorers of all time. Sharma is the only batsman in the history of the game to hit multiple double centuries in ODI cricket - he has three while no other has more than one.

Rohit is also arguably the most successful IPL captain - having won Mumbai Indians 5 IPL titles since taking over in 2013.

Apart from his splendid on-field show, Rohit Sharma has also had several light-headed moments when he’s made everyone laugh with his funny statements. His typical Bombaiya accent makes his amusing comments even funnier. 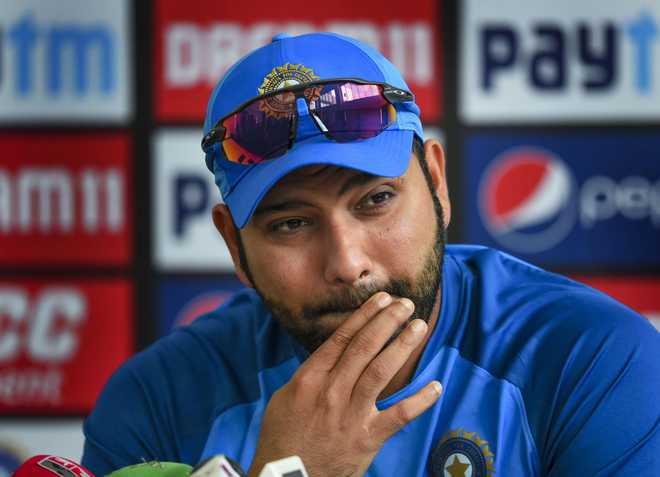 “If I become Pakistan’s coach…”

This has to be perhaps the most funnies bit from Rohit Sharma in a press conference that left the entire room of journalists in splits, and then fans on social media too.

After hitting a century against Pakistan in the 2019 World Cup encounter, which India won by a significant margin, Rohit was asked to give some tips to the Pakistani batters.

Rohit had a hilarious response ready up in his sleeve: “Agar main Pakistan ka coach bana to bilkul bataunga, abhi kya bataunga?” (If I ever become Pakistan’s coach, I will definitely let you know. What can I say right now?).

Reporter: "What would you suggest to the Pakistani batsmen to come out of this crisis?"

Rohit Sharma: "If I ever become the coach for Pakistan, I will tell them"#INDvPAK #CWC19 pic.twitter.com/brrETRKGiu

After being recalled to the Test side in the 2019 home series against South Africa, which was surely the last attempt by the selectors to revive Rohit’s Test career, Rohit was promoted to open the batting. And he repaid their faith spectacularly by slamming two Test centuries in the same Test.

When asked about his comeback, in the press conference Rohit Sharma took a funny dig at the journalists, saying that his failure would have given them the opportunity to criticise his return further.

“Acha opportunity tha upar batting karne ka to full use karna tha, nahi to fir kaafi kuch hone wala tha… mujhe pata tha… aap log kaafi kuch likh lete mere baare mein to isliye shayad, abhi achi cheez likhoge.” (I wanted to make full use of the opportunity to bat higher up the order. Or else, a lot would have happened, you guys (Journalists) would have written a lot about me. Now maybe you will write good things about me)

“I forgot what we wanted to do..” Rohit’s brainfade at the toss!

It has been revealed by a number of his teammates that Rohit Sharma has a habit of forgetting his stuff and even the names of peoples and places. But it came as a big shock when Rohit forgot what he wanted to do - batting or bowling first - after winning the toss against New Zealand in Raipur.

After he had won the toss, Rohit took about 10 seconds to remember what he’d decided to do initially.

“I forgot what we wanted to do, had plenty of discussions with the team about the toss decision,” Rohit said after he’d scratched his head keeping Kiwi skipper Tom Latham and match refreee Javagal Srinath waiting.

🚨 Toss Update 🚨#TeamIndia win the toss and elect to field first in the second #INDvNZ ODI.

Even after becoming the India skipper in 2022, Rohit Sharma had kept his relaxed and calm demeanor, and appeared with a similar tempo in the press conference ahead of his first Test series as India captain.

When inquired how he felt that he had only played around 40 Tests until that point, Rohit tackled the question in his own style, even forgetting what proper hindi words he needed to use.

“Aisa nahi, mujhe kuch regret hai, kaafi saari injuries aur kaafi saare anban hue hain beeche mein…… (corrects himself) Ups and downs – mera hindi utna accha nahi – Utaar chadhaav toh kaafi hue hain, aur voh chalta rehta hai jab tak aap cricket kheloge, aapko smooth ride nahi milega.” (I don’t have any regrets. There have been many injuries and rifts in my career….. ups and downs. My Hindi is not good. There have been lot’s of ups and downs but it happens for as long as you play, you don’t get a smooth ride in your career)

During the third Test match of the 2019 home series vs South Africa, Rahane and Sharma had a big partnership of 267 runs with both reaching three figures.

During the press conference after the day’s play, a journalist asked Rohit Sharma a question about Rahane’s inconsistent form. While asking the question, the journalist used the phrase ‘saala chabuk batting krta hai’ while referring to Rahane.

“What do you want to say about Ajinkya Rahane‘s batting, what’s it like watching it from other ends – ‘Saala chabuk batting Karta hai’.”

Rohit immediately had a smile on his face, and replied back with another funny remark. “Saala mat bolo yaar,” the opener said still trying to control his laughter.