Rassie van der Dussen registered his second ODI century on Wednesday against India in Paarl. His knock of 129* and the South African skipper Temba Bavuma’s 110 helped the Proteas post a mammoth total of 296. Van der Dussen came in at the score of 68-3 and staged a big 204-run partnership with his captain. …

Rassie van der Dussen registered his second ODI century on Wednesday against India in Paarl. His knock of 129* and the South African skipper Temba Bavuma’s 110 helped the Proteas post a mammoth total of 296.

Van der Dussen came in at the score of  68-3 and staged a big 204-run partnership with his captain.

The right-hander was superb with his shot-making, especially against the Indian spinners, Ravichandran Ashwin and Yuzvendra Chahal, often bringing out the sweep and reverse-sweep. He then tore into the pacers at the end to propel the total to close to 300. His innings was laced with 9 fours and 4 sixes.

With this, let’s look at 5 interesting facts about Rassie van der Dussen:

Rassie van der Dussen is a late bloomer in international cricket. He made his T20I debut in 2018 at the age of 30 followed by Test and ODI debuts in 2019.

Despite averaging more than 40 in first-class cricket over a 100 first-class games, and proving a handy part-time leg-spinner, he was off the selectors’ radar because of a variety of reasons – a surplus of all-rounders, already established players in the eleven, the quota system, among others. 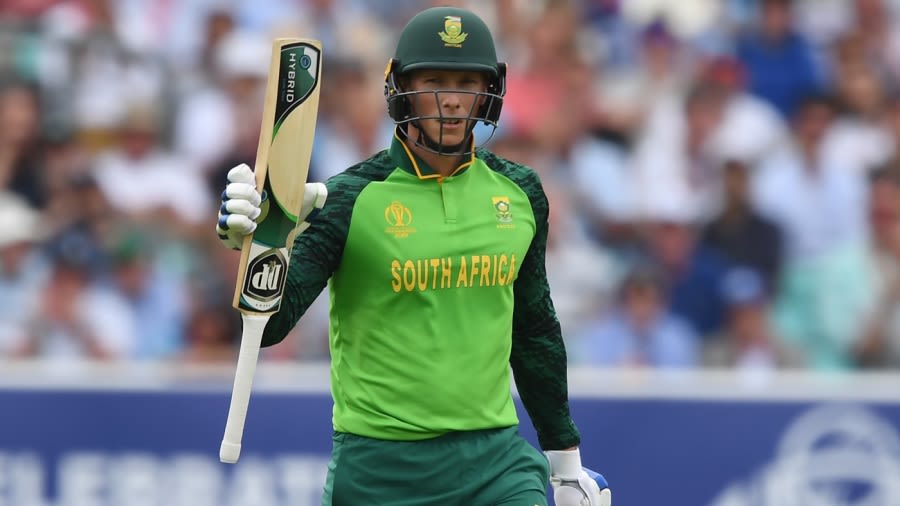 2. Fifties on debut in each format

Van der Dussen struck a fifty on his T20I debut, versus Zimbabwe, before scoring 93 on his ODI debut versus Pakistan. On his Test debut, too, the right-hander made 51 in the second innings versus England.

At the age of 32 years and 54 days, he also became the oldest cricketer for South Africa to score his first century in an ODI match.

A superb string of fifties across formats got him a place in South Africa’s 2019 World Cup squad where he was exceptional with the bat. In August 2019, van der Dussen was named the International Men’s Newcomer of the Year at Cricket South Africa’s annual award ceremony.

Rassie van der Dussen had played in several countries before his maiden outing for South Africa. He had played cricket in South Africa, England, Ireland, Netherlands, Canada and the Caribbean and made a name for himself as a white-ball batter before the national selectors gave him his first T20I call-up.

The Pretoria-born batsman was drafted into the 2018 Caribbean Premier League as an injury replacement for the St. Kitts and Nevis Patriots. This notification had come after he smashed an unprecedented 959 runs in 10 matches in the Sunfoil series of 2017/18.

Before that, he was also picked for the inaugural Global T20 league in Canada by the Vancouver Knights where he ended up as the team’s highest run-getter (255 runs) helping them to the title.

He finished 2018, topping the batting charts in the inaugural Mzansi Super League with 469 runs at a strike rate of 138.75 taking Jozi Stars to the trophy. He was also picked by Islamabad United in the 2020 PSL draft.

5. Rassie van der Dussen was the leading run-scorer in South Africa’s first-class domestic competition in 2017-18, making it impossible for the selectors to ignore him anymore.