Indian woman skipper Harmanpreet Kaur slammed a blistering century on Wednesday against England at the St Lawrence Ground, Canterbury, in the second ODI of the series. The right-hander batter smashed 143 unbeaten runs off 111 balls, helping India to a mammoth total of 333/5 - India women’s second-highest total ever in ODIs.

Harmanpreet Kaur has been in terrific form recently, having smashed 74* in the first ODI, which India won courtesy of Smriti Mandhana’s 91 (99) while chasing 228.

In the second ODI, though, Mandhana got out after scoring 40 runs and her opening partner, Shafali Verma, for only 8 runs. Number 3 Yastika Bhatia managed only 20 and India at 99/3 were in a bit of a pickle.

India needed their skipper to deliver today and needed a big partnership; they got both. Kaur and number 5 batter Harleen Deol were involved in a big stand of 113 runs off 125 balls. The latter got out after scoring 58 runs but Kaur continued and grew in confidence after she’d taken her time to settle down. 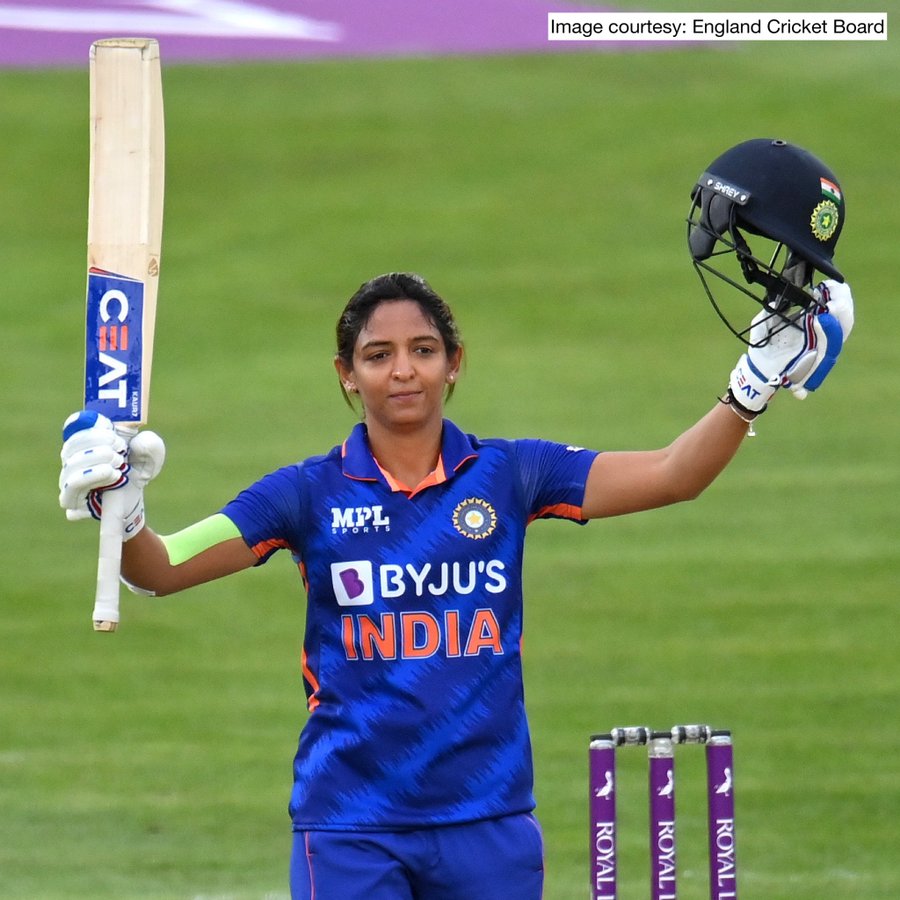 In the company of Pooja Vastrakar (who scored 16), Kaur whacked 31 runs off 20 balls. She then batted in the top gear in the last 5 overs. In the last 15 balls she faced, Harmanpreet Kaur plundered 49 runs! The sixth-wicket stand with Deepti Sharma yielded India 71 runs off only 24 balls with England also leaking 24 wides in their entire innings.

Kaur brought her 5th ODI century up in the 47th over. She finished the innings with three fours and a six in the last over, bowled by Freya Kemp, taking 19 off it. Ecclestone leaked 17 in the 49th over while Freya Kemp had a nightmarish 48th over leaking 28 runs including a spate of wides. Kaur went from 100 runs off 100 balls to end with 143 off 111 balls.

Harmanpreet Kaur equals Smriti Mandhana's record of ODI centuries; only Mithali Raj ahead of them

This was her 5th ODI ton, now equalling the tally of Smriti Mandhana. Their tally of 5 centuries is the joint second highest for Indian women in ODIs after former skipper and legendary batter Mithali Raj’s tally of 7 ODI tons.