The third T20I match against Sri Lanka was all about Suryakumar Yadav, who continued his incredible form of 2022 into the new year as he registered the third T20I ton of his career. The World's no.1 T20I batter produced another powerful and entertaining knock to help the Indian cricket team post a massive total of 229 on the board after skipper Hardik Pandya won the toss and chose to bat first.

Walking out to bat at number 4, SKY toyed with the Sri Lankan bowlers as he smashed them to all the corners of the ground. He played a sensational knock of 112 off 51 deliveries and remained unbeaten till the end of the innings. His amazing knock was laced with seven fours and nine sixes. He ended the innings in style by hitting a six and a four off Chamika Karunaratne in the last over. 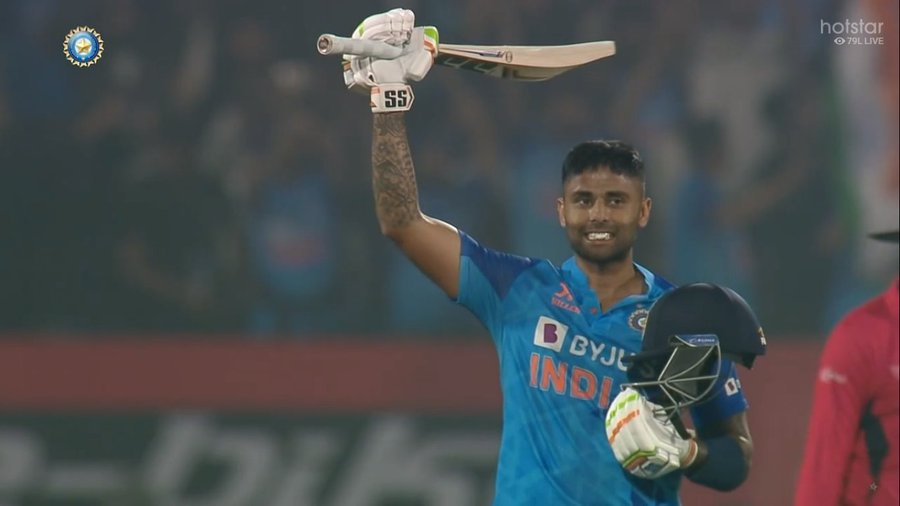 Meanwhile, Suryakumar Yadav has been receiving praise from all corners for his terrific century that helped the Indian side defeat Sri Lanka and win the series by 2-1. From cricketers to experts and fans, everyone is taking to social media and hailing the brilliance of the Indian batter.

Among many, former cricketer and popular commentator, Ian Bishop also took to his Twitter and posted a special tweet for Surya. In his tweet, he asked a very interesting question as he hailed SKY for his brilliance. He asked: "Imagine Suryakumar Yadav debuted 6 years ago. Would he be as good or has a debut at age 30 worked in his favor?"

Imagine Suryakumar Yadav debuted 6 years ago. Would he be as good or has a debut at age 30 worked in his favor?

For the unversed, Suryakumar Yadav, who is 32 years old, made his debut for the Indian cricket team in March 2021, however, he took no time in cementing his place in India's playing XI and establishing himself as one of the mainstays in the Indian batting line-up in the shortest format.

The tweet went viral in no time and was flooded with mixed reactions from the fans. While several fans feel that the current form of SKY is the result of his hard work of several years, on the other hand, there were many who felt that SKY should have made his debut a few years back.

Check out the reactions of fans to Ian's tweet:

Surya kumar 6 years ago was mining coal in Bokaro, That is why we unearthed a diamond

Personally feel it worked better for him, he knows his batting, is confident about his shots.

Debut at 30 was right for him. Those past 6 years (playing different roles in MI and KKR) has made him realise what he is capable of. Hence we see the confidence he has now with his batting. A debut 6 years ago might not have yielded the same result.

Hindsight is a beautiful thing we would never know. He is somewhat like Mike Hussey pro max ! 🔥🔥🔥 https://t.co/XB5gEkvaJr

He will be not as he his today. He had tasted the success by his hardwork and by challenging the situations. As time teaches us the lesson. #SuryakumarYadav #INDvsSL https://t.co/WykPBYI1fL