SA20: Zainab Abbas Falls On The Ground After MI Fielder Crashes Into Her Feet On The Boundary

The first half of the SA20, which is Cricket South Africa’s third and biggest attempt for a T20 league, has been a bumper success so far with heavy crowds coming in to watch the local and overseas international stars, and they have enjoyed the entertaining action on display, with some terrific batting, bowling, and fielding performances making the headlines.

One incident, though, which involved presenter/anchor Zainab Abbas has gone viral in which Abbas, who was conducting an interview with a coach on the boundary line with the game going on, fell on the ground after an MI Cape Town fielder crashed into her following his diving attempt to save a boundary.

This incident, or rather an unfortunate accident, happened in the game between Sunrisers Eastern Cape and MI Cape Town on Wednesday, played in Newlands ground. 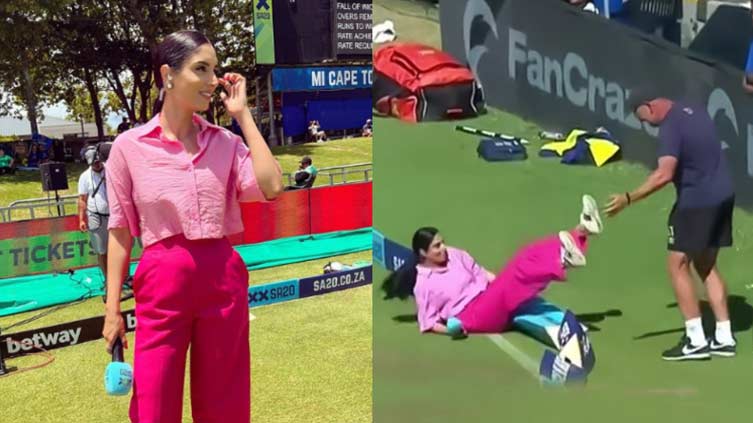 In the 13th over of Sunrisers’ innings, lank batter Marco Jansen pulled MI Cape Town’s Sam Curran’s length delivery towards the leg side boundary where two fielders, from deep mid-wicket and long-on, chased after the ball and almost collided.

The deep mid-wicket fielder put in a passionate dive to save the boundary, but couldn’t save that boundary, and also crashed into Zainab Abbas who was ball-watching realizing that the ball had been hit toward her.

Thankfully, Abbas didn’t seem hurt, at that moment, and she was quickly back on her feet. She even donned a big smile to end the interview.

The video of this, of course, has gone viral on social media. And we have it for you here:

"This is coming straight for us.." 🫣@ZAbbasOfficial, you good? 🤣@CapeTownCityFC your manager somehow avoided the contact! pic.twitter.com/32YPcfLCMf

Speaking of the match, Marco Jansen turned it around for SEC, helping his side win from a difficult position, which included him taking down Rashid Khan for a big over. Marco Jansen scored 66 off 27 balls as SEC chased the target of 172 runs with three balls remaining.