Bollywood actress Athiya Shetty grabbed all the limelight on social media on Thursday after he took to her Instagram and celebrated her rumored boyfriend, cricketer KL Rahul’s century at the Mecca of Cricket.

It was KL Rahul’s first ever century at the Lord’s Stadium and first century in Tests since September 2018.

Athiya, who is currently in England alongwith Rahul, showered him with love after his stunning performance on the opening day of the second Test match. She took to her Instagram stories and shared a video of KL Rahul celebrating his century. She also added a couple of celebratory emojis, including a red heart. The video was from the stadium but was recorded off a television screen by her.

Here, check out the screenshot of Athiya’s Instagram story: 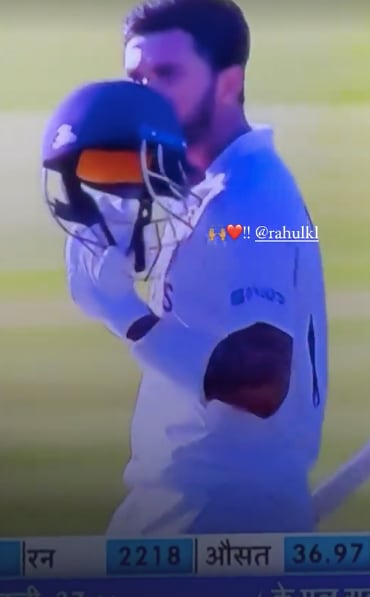 Earlier, Athiya’s father and Bollywood superstar Suniel Shetty also took to his social media and celebrated Rahul’s century with a heartfelt post. Suniel Shetty, who celebrated his birthday on Wednesday, took to his Instagram and shared a brief video of KL Rahul from the match and also thanked him for giving him the special gift in the form of his century. He wrote:

“100 at the Mecca of cricket! Congratulations and god bless baba, @rahulkl. Ps: thank you for my bday gift!”

KL Rahul and Athiya Shetty have been rumored to be dating each other for a long time now, however, the rumored couple hasn’t officially confirmed the same. They are often seen painting the Instagram red with their love. A few weeks back, an HT report claimed that before leaving for the World Test Championship Final in England, KL Rahul had listed Athiya Shetty as his partner.

Rohit Sharma Showed Why He Is The Coolest Indian Cricketer