After falling short by only 14 runs from a century in the first ODI against England in Adelaide, David Warner made sure he crossed the three-figure mark in the third ODI, on Tuesday, in Melbourne, and was involved in a mammoth opening stand of 269 runs in 38.1 overs with Travis Head.

It is not often that David Warner gets under shadowed in white-ball cricket, but it was his partner, Travis Head, who was the aggressor. Head scored 152 runs off 130 balls, hitting 16 fours and 4 sixes, while Warner scored 106 runs off 102 balls with the help of 8 fours and 2 sixes.

Even though Australia lost wickets in bundle toward the end of their innings, the gigantic opening stand between Warner and Travis Head ensured they finished with a big total of 355/5 in the game which was reduced to 48 overs due to rain. 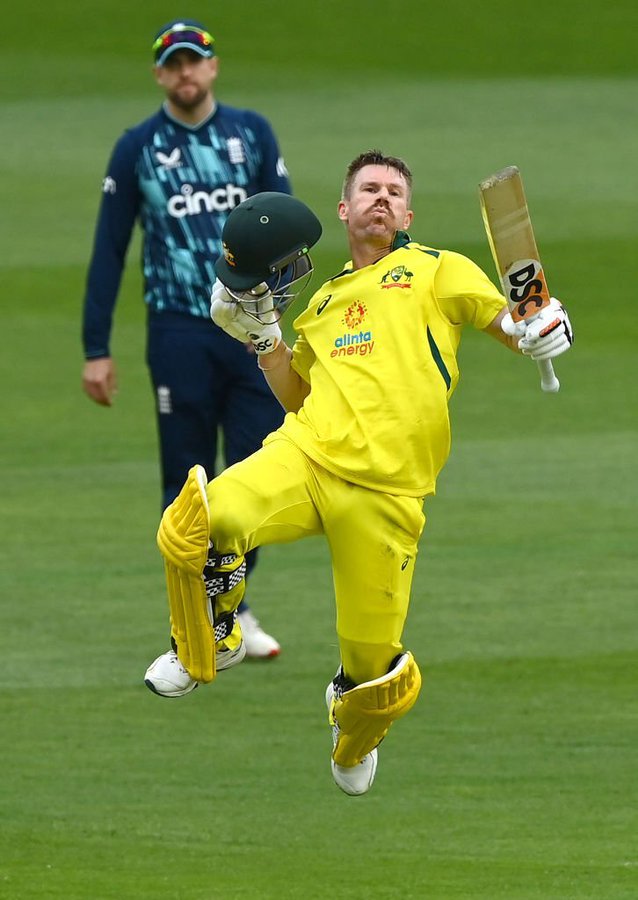 With 19 ODI centuries under his belt now, David Warner surpassed Mark Waugh’s record of 18 ODI centuries and is now the batsman with the second-most ODI tons for Australia in men’s ODI; only former captain Ricky Ponting has recorded more ODI centuries than Warner, Ponting raised 29 ODI centuries. Aaron Finch, who has now retired from ODI cricket, had 17 ODI tons while Steve Smith has 12 ODI centuries.

This was, in fact, Warner’s first ODI century since January 2020! His celebration of jumping big in the air, leaping and raising his helmet with aggression on his face, and then waving his bat to the crowd - though there wasn’t much present at the MCG - was back and was phenomenal to see.

Speaking after his innings, Warner said: “Head is hitting the ball as well as he can. Credit to him today. I was trying to play second fiddle, was just trying to rotate the strike. We tried to dispatch the ball when they bowled full, a pretty competitive total. (About playing his last ODI on Australian soil) A lot of us were talking about this at the SCG. Another 14 Test matches, I think before we play another white-ball game in Australia. You never know, I might be back in 2024 (laughs).”