Star India all-rounder Ravindra Jadeja's presence was badly missed by the Indian cricket team in the recently concluded T20 World Cup 2022. Over the years, Jadeja has become an integral part of the Indian cricket team with his wily left-arm spin, dependable lower-order batting, and terrific fielding. He is currently out of action owing to an injury that he suffered in September which also forced his exclusion from the Asia Cup and the T20 World Cup. Jadeja was not picked for the ongoing New Zealand tour as well. However, he is expected to return for the Bangladesh Test series next month.

While he is out of all the cricketing action but he has been making a lot of news these days. He is presently helping his wife Rivaba, who has recently announced a BJP candidate from the Jamnagar (north) Assembly seat in the impending Gujarat election. 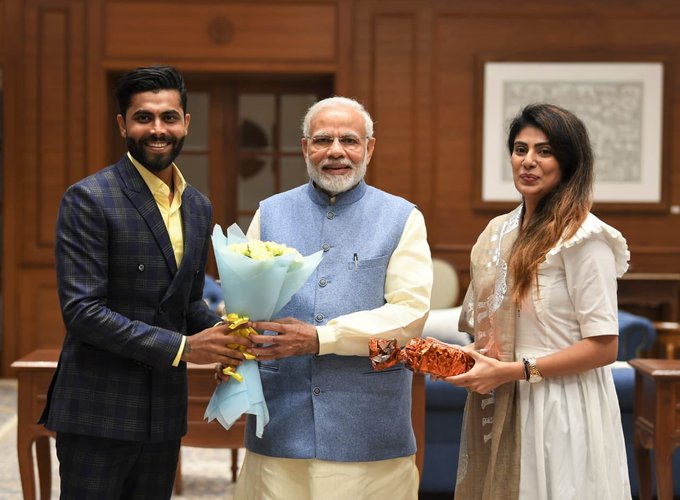 Recently, Jadeja also recalled his very first meeting with Prime Minister Narendra Modi, almost a decade back and revealed the epic reaction of the Prime Minister when MS Dhoni introduced him.

Speaking in a video shared by the  Free Press Journal, Jadeja revealed that it was back in 2010 when he had first met PM Modi, who was then the chief minister of Gujarat. At that time the Indian cricket team was visiting Ahmedabad for a match. When captain Dhoni introduced Jadeja to the Prime Minister, he laughed and said “He’s our boy”. Jadeja revealed:

“I had first met him (Modi) in 2010 in Ahmedabad. He was the chief minister of Gujarat back then,”

He further added, “We (India) had a match against South Africa in the Motera Stadium. Mahi bhai (MS Dhoni), who was our captain back then introduced me to him. Modi Sahab ne khud bola ki ‘bhai ye toh apna ladka hai, dhyaan rakhna (Modi Sahab said himself, ‘He’s our boy, take care of him)’. He said so with a laugh while being in a light mood).

"That’s when you feel…. a person of such big stature comes to you and says this personally. Ek alag si feeling aati hai. I felt really good when he said this.”