India’s sensational batter, Rohit Sharma has recently succeeded Virat Kohli as the captain of India’s T20I and ODI team. His era has just started and the newly-appointed captain is all set to prepare India’s middle-order for the situations when the side finds itself in difficult situations. Though he already took the captaincy charge in T20Is …

India’s sensational batter, Rohit Sharma has recently succeeded Virat Kohli as the captain of India’s T20I and ODI team. His era has just started and the newly-appointed captain is all set to prepare India’s middle-order for the situations when the side finds itself in difficult situations.

Though he already took the captaincy charge in T20Is from the recently concluded 2-match T20I series against New Zealand but he wasn’t officially announced as the captain of the shortest format by the selection committee at that time. However, there was one thing in common in all these failures, and that was India’s inability to recover from an early loss of wickets.

While talking to one of India’s most famous cricket historians and journalist Boria Majumdar on his show ‘Backstage with Boria’, Rohit Sharma was asked if he has been able to figure out what went wrong in those games.

Responding to this, Rohit said: “To be honest, not really. I would say it was that initial phase of the game where we lost the game. So that’s something I’ll keep in mind and see that we prepare for the worst. We have to prepare when the team is 10 for 3. That’s how I want to move forward and get the message across to the boys that guys who are batting at No. 3, 4, 5, 6, there’s nowhere written that if you are 10 for 2 or 3 [in a T20I], you can’t get 180 or you can’t get 190, or maybe more.” 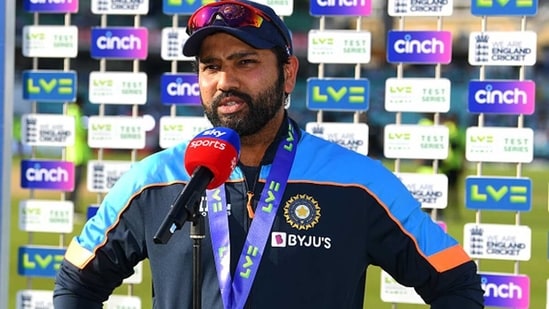 He explained how he wants to prepare the white-ball middle order for the situations when the side has been reduced to “10 for 3”. He also pointed out the similarities in India’s defeat in the recent ICC tournaments. He said:

“I want the guys to prepare in that fashion. Let’s say we are playing the semi-final and we are 10 for 2 in the first two overs, what do we do? What is the plan? I want to put ourselves in that situation again and see if we can respond to that. We have got some games before the World Cup to try and test that out. Because if you look there is a similarity between all three games that we lost – two Pakistan games and one New Zealand game in three ICC tournaments.”

Rohit further added that he wants Team India to test itself in the matches ahead of the upcoming T20 World Cup next year. He said:

“We got some games before the World Cup and try and test ourselves. If you look at it, we see a similarity in all World Cup games that we lost. The 2 Pakistan games and the one New Zealand game in the three ICC tournaments.”

“But that can happen. I understand that the quality of bowling is exceptional. It has happened three times, I hope it doesn’t happen for the fourth time. We will hopefully keep preparing for that,”

Meanwhile, captaincy is nothing new to Rohit Sharma, who is the most successful skippers in the IPL history, having taken Mumbai Indians to five titles after he took charge in 2013.

Talking about his tally with India, Rohit has won eight of the 10 ODIs he has led the Indian team so far, including winning the 2018 Asia Cup, where he was the stand-in skipper. In T20Is, Rohit has won 18 games off 22 games, of which three came recently against New Zealand at home. Rohit will be looking forward to ending the ICC trophy drought for the Indian side.