Young South African batting sensation Dewald Brevis tumbled records at the Senwes Park in Potchefstroom on Monday in the CSA T20 Challenge as the right-hander smashed 162 runs off 57 balls for Titans against Knights, the bowling attack of which included renowned figures Mbulelo Budaza, Migael Pretorius, Gerald Coetzee, and Aubrey Swanepoel.

Opening the batting, 19-year-old Dewald Brevis walloped 13 fours and 13 sixes in his innings where his strike rate was 273!

Brevis brought up his half-century in 18 balls and completed his century in 35 balls - which is the joint-fifth fastest T20 century, as per the records of ESPNcricinfo, and the fastest domestic hundred in South Africa.

This eventual score of 162 by Brevis is the joint third-highest T20 score, equalling those set by Hazratullah Zazai and Hamilton Masakadza. Chris Gayle’s 175* in 2013 IPL, the innings in which he hit his century in 30 balls, are the records that stands still. Aaron Finch is next with 172 vs Zimbabwe in 2018. Brevis was dismissed by Gerald Coetzee in the 20th over missing Gayle’s record. 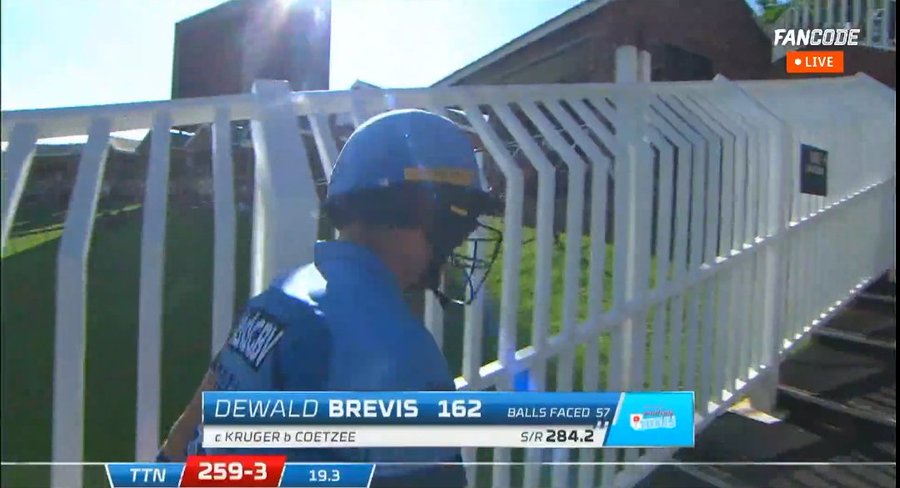 Dewald Brevis is nicknamed ‘Baby AB’ because of the similarities in his batting stance, how he gets into positions while shot-making with the former South African captain AB de Villiers. Ever since Dewald Brevis got into under-19 cricket, many coaches and then fans spotted these similarities between the two and gave this moniker to young Brevis, who idolizes de Villers.

After Brevis’ sensational knock on Monday AB de Villiers took to Twitter to hail the 19-year-old. There isn’t much left to say, just watch out for the future as this talented youngster takes on the world, seemed the emotions of ABD.

Brevis was bought by Mumbai Indians for IPL 2022 and left a terrific first impression: in 7 innings, he averaged 23 but scored at an impressive strike rate of 143. His take down of Rahul Chahar with 4 sixes in an over was spectacular.