Indian captain Rohit Sharma, who was returning to the Indian side after missing out on the T20I series against Sri Lanka because of a thumb injury that he suffered against Bangladesh in the 2nd ODI in 2022, roared back to the cricketing fold. His love for Sri Lanka continued as he played a stunning knock of 83 runs while opening for the Indian team in Guwahati on Tuesday.

India and Sri Lanka are currently locking horns in the first of the three-match ODI series in Guwahati. After being asked to bat first, the Indian side got off to a stunning start thanks to their openers Rohit Sharma and Shubman Gill. Both the openers started the innings on a positive note, by bringing in 143 runs in the first 19 overs of the first innings. Gill scored a rapid 70 off 60 balls before getting out. Rohit Sharma's hitting prowess was on show in Guwahati as he smashed the Lanka bowlers to all the corners of the ground. 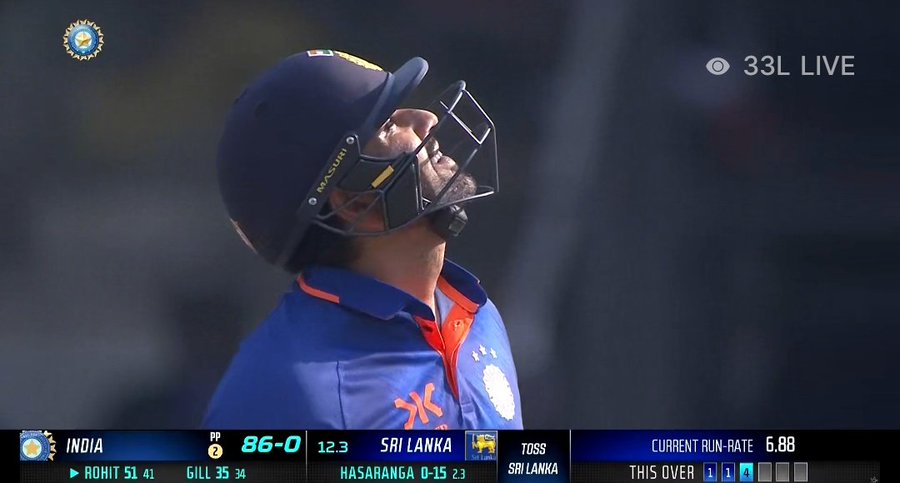 Rohit Sharma, who last scored an ODI century against Australia in January 2020, missed his hundred by just 17 runs. He looked well set to equal legendary Ricky Ponting's record of 30th ODI century but fell short of a few runs as he was clean bowled by pacer Dilshan Madushanka. During his stunning knock of 83 runs, Rohit smashed 9 boundaries and 3 sixes in the game.

Meanwhile, Rohit was seen looking up in the sky and saying something after notching up his 47th ODI half-century. He was dedicating the milestone to his pet dog, a beagle, who passed away on Monday (January 9). The video of the same has been going viral on the internet.

Rohit Sharma's wife Ritika Sajdeh also shared pictures of the pet dog and shared an emotional message on her Instagram account. She wrote:

"Yesterday was by far the hardest day of our lives. We said goodbye to the love of our lives. You have been the best furbaby anyone could ever have. My first love, my first baby, the most gentle furball that ever lived. Until we meet again. Our lives will always have a little less Magic in it,"