Australia’s star opener David Warner put up a stellar show against Sri Lanka in the fourth ODI of the series, however, the game didn’t go in his side’s favor. The Australian cricket team was defeated at the hands of Sri Lanka by 4 runs in the fourth ODI to seal the series by 3-1 with the fifth and final ODI yet to be played.

David Warner Was Dismissed On 99

During the game, Warner joined an elite list after he was stumped by Niroshan Dickwella when he needed just one run to get to a much-awaited century. Yes, David Warner was dismissed one short of a century against Sri Lanka in the fourth ODI match at the R. Premadasa Stadium in Colombo on Tuesday.

When he reached 99, it looked like Warner will end his international career’s biggest century slump, however, he failed badly as his century drought continued. He has played 48 innings without smashing a century, across all formats.

Also Warner became just the second batter in the history of ODI cricket to be stumped for 99. The only other cricket to achieve this feat is former Indian cricketer VVS Laxman.

Meanwhile, social media has been buzzing with reactions after Warner was dismissed on 99 runs. Check out the best reactions:

Heartbreak for David Warner – dismissed on 99 in 112 balls. Missed out on a very well deserved century, a great innings by Warner. pic.twitter.com/EMVf7oKmaN

First time in the history of ODIs that the opening batters have fallen on the dreaded figures of 0 and 99 in the same innings. #SLvAus

He misses out on his

David Warner missed out a deserving hundred by just 1 run, he departs for 99 runs from 112 balls – Sri Lanka on a roll here. pic.twitter.com/kDGndRUCkc

Heartbreak for David Warner. He gone for 99 runs. But nevertheless he played a brilliant Innings in this difficult condition in this run chase against Sri Lanka. Well played, David Warner. pic.twitter.com/YBOFSx6sgq

Out at 99. David Warner misses out scoring what would be only the second men's ODI hundred by an Australian in Sri Lanka.

The first of them was at Pallekele in 2016, by David Warner himself.#SLvAUS

During the game, Warner also gave cricket fans another moment to behold when he grabbed a one-handed stunner to dismiss Dhananjaya de Silva while fielding at mid-on. His fielding effort left many jaws dropped, including some of his teammates and opponents.

The video and picture of the same has been going viral on the internet. Check out the picture: 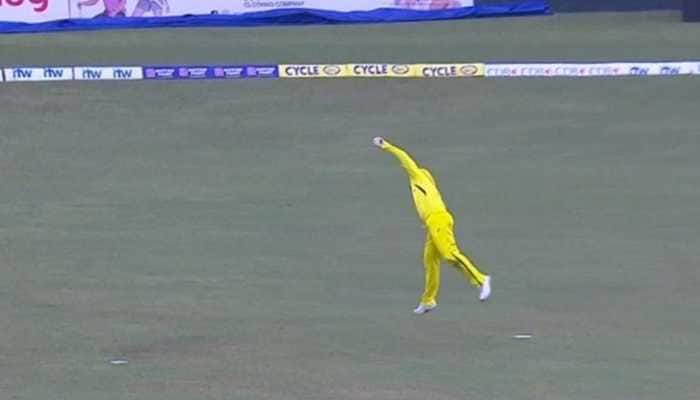 Talking about the game, the match shifted significantly in Sri Lanka‘s favour after Warner’s dismissal. Sri Lanka registered their first bilateral ODI series victory against Australia at home since 1992.