Shreyas Iyer made his last bid for a place in the Asia Cup squad and it was a fantastic one: opening the batting for the first time in his international career, Shreyas Iyer smashed 64 runs off 40 balls in the fifth and last T20I vs West Indies on Sunday, in Florida. Shreyas Iyer Made …

Shreyas Iyer made his last bid for a place in the Asia Cup squad and it was a fantastic one: opening the batting for the first time in his international career, Shreyas Iyer smashed 64 runs off 40 balls in the fifth and last T20I vs West Indies on Sunday, in Florida.

Shreyas Iyer Made A Solid Comeback

India’s squad for the Asia Cup starting August 27 is set to be announced in the coming days, and this was a one final push by Iyer to get into the 15-man squad after he had had a torrid time with the bat between this T20I and the IPL 2022.

Iyer has been largely disappointing in T20Is recently: after the IPL 2022, Iyer had featured in 9 T20I innings for India, in which he has managed an average of 19 with a dismal strike rate of 110!

Today, though, he managed to turn things around. Asked to open the batting after India decided to rest both Rohit Sharma and Suryakumar Yadav given they had already sealed the series, Shreyas Iyer showed his intent straightaway – on the fifth ball of the first over, bowled by Jason Holder, Iyer cleared his front leg and lofted the pacer over mid-on for a boundary.

He then cracked Dominic Drakes for a couple of boundaries and then took another boundary off Keemo Paul to race away to 22 off 14 balls, before losing his opening partner Ishan Kishan.

Deepak Hooda, who is also competing with Iyer for a middle-order spot, stroked a couple of boundaries to Paul as India ended the powerplay at 53/1. Iyer smashed leg-spinner Walsh for a first-ball four and then tore into seamer Odean Smith for two sixes on consecutive deliveries – one over deep point and the other over deep mid-wicket. 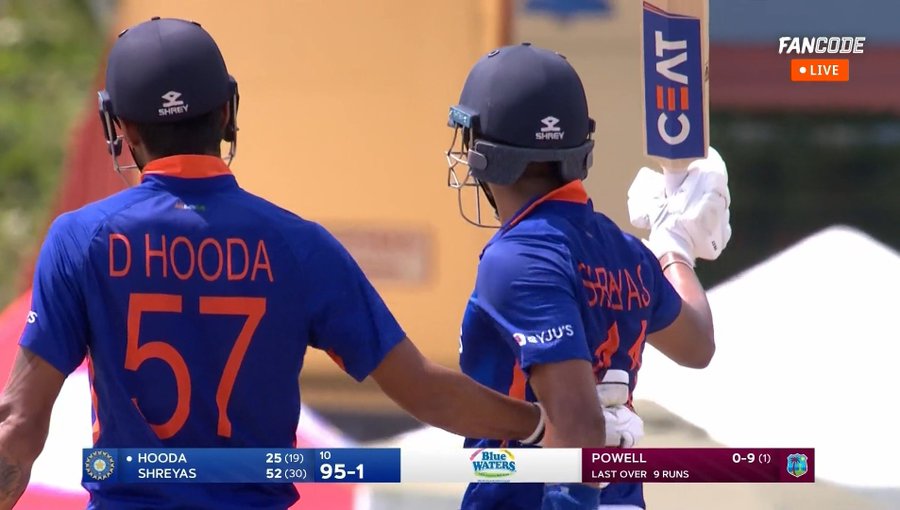 Iyer brought up his fifty with a pristinely timed four off Powell. Hooda and Iyer then hammered McCoy for 17 runs in an over before Walsh had Hooda caught in the deep.

Iyer sent a Holder full toss to the fence for his 8th boundary but the lanky pacer had Iyer eventually, caught and bowled with a soft dismissal, at the point India reached over 120 in 13 overs. The lower order then took India’s total to 188.

Shreyas Iyer was very much praised by fans as he now has managed to give a solid performance that would further his cause as far as his future T20I prospects are concerned.

Here are some of the Twitter reactions on Iyer’s sublime half-century:

Fifty by Shreyas Iyer in 30 balls – a brilliant innings so far by Iyer, came into the side today after missing out previous one and cashing in. pic.twitter.com/E1a0p0wtHC

Shreyas Iyer departs for 64 in 40 balls. A good innings by Iyer tonight, he opened the innings.

Fifty for Shreyas Iyer, 52* from 30 balls – returning into the team, he has made big impact while opening for India.

Yes, one can point out technical flaws but he has that steely resolve. Just doesn't give up.

, opened the innings and playing a beautiful knock. Skipper This is what everyone expect from You. You are a beast just play like this. & welcome back with fifty #ShreyasIyer | #WIvIND | #WIvsIND | #CricketTwitter | #T20I pic.twitter.com/HXzgTekAei

BC iyer is hitting bouncer out of boundry

Tomorrow is Asia Cup team selection and iyer scored 64 making his spot safe now hooda and Samson most probably won't be there as Kl and kohli are gonna be back.

Shreyas Iyer is the leading run scorer for India in T20I in 2022.