India’s under-19 captain, Yash Dhull stole the show with his batting heroics as he lead the under-19 cricket team from the front. Yash Dhull alongwith Shaik Rasheed helped the Indian team to post an imposing total of 290/5 runs against Australia in the second semi-final of the ongoing U-19 World Cup in Antigua on Wednesday. …

India’s under-19 captain, Yash Dhull stole the show with his batting heroics as he lead the under-19 cricket team from the front. Yash Dhull alongwith Shaik Rasheed helped the Indian team to post an imposing total of 290/5 runs against Australia in the second semi-final of the ongoing U-19 World Cup in Antigua on Wednesday.

The young and talented batter was reminded of former Indian captain Virat Kohli, who scored 110 runs. Yash Dhull became the third Indian captain after Virat Kohli and Unmukt Chand to score a century in the under-19 World Cup. 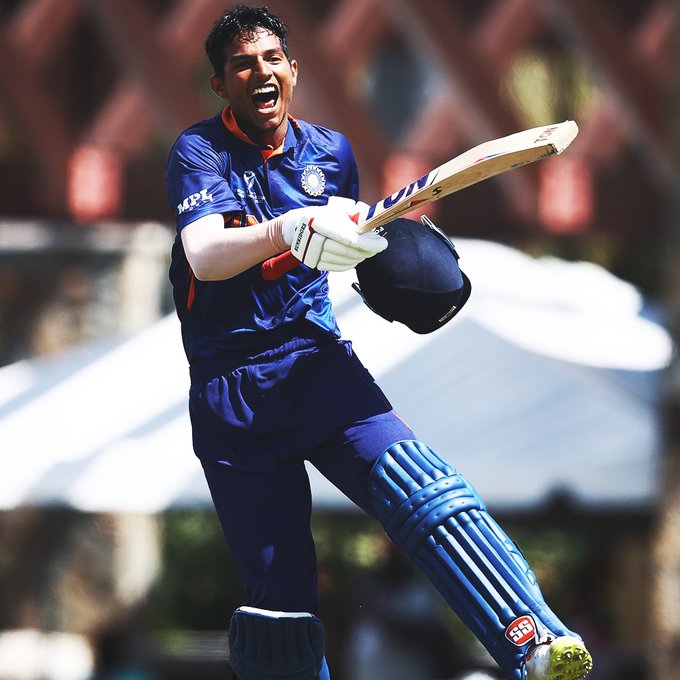 Rasheed also played a crucial knock as he stitched an important partnership of 204-run stand in 200 balls for the third wicket. Both the cricketers led India’s comeback after an early wobble that saw team India stumble to 37/2 in 12.3 overs.

Dhull brought up his stunning century in the 45th over. After smashing successive fours through point against Whitney, he scored two runs to register a century off 106 balls.

Meanwhile, as soon as Dhull smashed his century, fans on social media went berserk as they came up with their amazing reactions to it. From fans, experts to cricketers, everyone applauded the performances of Yash with their special messages.

Hundred by the Indian U19 captain Yash Dhull. What a knock by the captain, a splendid innings. During the tournament he got COVID19 positive and recovered from that and scored a century in the Semi Finals. pic.twitter.com/85k1uBR6Zq

Forget about baby AB, we have got our baby Virat Kohli!!

Yash Dhull seems to have modelled his game on Virat: busy, making the bowler bowl to his strength, shots throughout the wagon wheel. And a thinking player

The captain Yash Dhull brings up his first hundred and I am sure it’s just the start of a wonderful journey. #INDvAUS #Under19WorldCup2022

There is a bit of Rahane in Yash Dhull's set-up against pace..

Magnificent Yash Dhull – captain lead from the front – 110 runs from 110 balls in the World Cup Semi-final, he had Covid in the midway of the tournament and then come back strongly on the big stage. pic.twitter.com/ApxuK2G8eq

Yash Dhull is a street smart cricketer. Will surely be a great pick for any IPL team. Hope he is picked by Delhi in all formats

Class of Yash Dhull. Captain leading from the front in Big match for India. pic.twitter.com/TtFwB6InaE

This is a Yash Dhull and Shaik Rasheed appreciation post. A brilliant partnership which gave away their very mature understanding of the 50 over format. Come on colts #INDvAUS

Talking about the game, team India secured a five-wicket win in their quarterfinal clash defending champions Bangladesh. However, the team lost wickets in quick succession in the 112-run chase.

Later, after the match, in the pre-match press conference, Yash Dhull said: “Australian bowling attack is a normal one and we focus on building partnerships as soon as we lose quick wickets.”

“Our focus then shifts towards building partnerships so that we could score more in death overs.”

Dhull also heaped praises about former India cricketer VVS Laxman, who is currently with team India. He said: “Laxman sir shares his experience with us which is very crucial for upcoming games and he has a very important role in our camp.”