IND vs BAN Highlights: Athiya Shetty Cheers For Boyfriend KL Rahul As He Made A Solid Comeback In T20 World Cup

IND vs BAN Highlights: Athiya Shetty Cheers For Boyfriend KL Rahul As He Made A Solid Comeback In T20 World Cup

Athiya Shetty and KL Rahul are one of the most popular and adored couples in the tinsel town of Bollywood. Fans have been going gaga over them, ever since they made their relationship official on social media. The duo is often spotted together, and they hardly ever shy away from expressing their love for each other.

From dropping lovely comments on each other pictures on social media to giving some major couple goals to their fans, the couple knows how to remain in the limelight.  Now keeping their trajectory, Athiya Shetty turned a cheerleader for her boyfriend KL Rahul after he scored his first half-century in the ongoing T20 World Cup 2022.

KL Rahul, who was going through a terrible form off-lately, made a solid return to the form and registered his first fifty of the ongoing T20 World Cup 2022 in a match against Bangladesh. KL Rahul registered his 22nd T20 international fifty off only 31 balls to get his side off to a flyer after the early dismissal of captain Rohit Sharma against Bangladesh in their Super 12 match at  Adelaide.

Athiya Shetty took to social media and shared an adorable photo of Adelaide Oval, in North Adelaide, Australia. She even tagged KL Rahul in the pic and added a heart emoticon. Athiya was seen cheering for KL Rahul from the stands. She was even seen posing for a pic with Suryakumar Yadav’s wife Devisha Shetty while Dhanashree Verma clicked the selfie. The trio looked adorable in the picture.

Check out the pictures shared by Athiya Shetty: 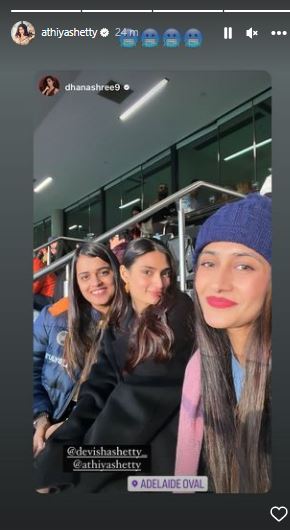 Meanwhile, there have been rumors about Athiya and Rahul’s wedding for a long time now. Suniel Shetty, actor and Athiya’s father, earlier commented on the wedding plans and said that they were aware of KL Rahul’s busy schedule and didn’t want to put any pressure on them.