IND vs BAN: Ravi Shastri Made A Big Statement On KL Rahul's Form

IND vs BAN: Ravi Shastri Made A Big Statement On KL Rahul's Form

Former Indian head coach Ravi Shastri wants KL Rahul to find his form back soon as team India can't afford to put the middle order under pressure in every game losing his wicket early in the innings. KL Rahul has been struggling to score runs for a long time now and has failed to deliver in the three matches played so far. His poor performances have put him under the scanner. In all three games, Rahul got out for single-digit scores after scoring back-to-back fifties in the team’s last two warm-up matches.

Meanwhile, speaking on the ICC's 'The Big Time Preview,' ahead of the India vs Bangladesh game, Ravi Shastri said that there needs to be more consistency from the top order He said Rahul scoring runs will help the Indian side as isn't always favorable to put pressure on the middle order. He said: "You need some more consistency from the top. KL Rahul getting some runs will help because you can't keep putting pressure on the middle order,"

In the last three games, middle-order batters have come to India's rescue after a top-order batting collapse. Time and again, KL Rahul has shown the carnage that he can cause when he is on song however he has failed to deliver whenever there is a big occasion or an important game. 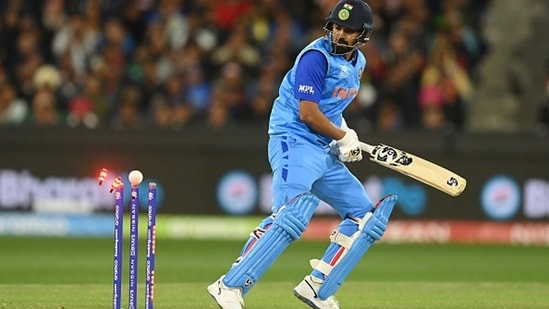 Now heading into the big match against Bangladesh on Wednesday, KL Rahul's position in the team is being questioned by many. While he has been receiving criticism from all corners, Indian head coach Rahul Dravid has come out in support of the opener and has backed him to score big runs against Bangladesh.  Dravid had said:

"No, not at all (his technique and mindset bothering you?). He is a fantastic player. He has got a proven track record. He is batting superbly (at the nets). And these things can happen. In a T20 game, it's been tough. It's not been easy for top-order batters in this T20 World Cup. The ball has been doing a bit,"

He added: "He is actually playing really well, I just hope it all clicks together in the next couple of games. We all know his quality. We all know his ability. He is really suited to these kinds of conditions, these kinds of pitches. He has got a good all-round game, good backfoot game, which is very essential in these conditions. We are pretty happy with the way he is hitting it,"