IND vs NZ: Rishabh Pant Is Getting Trolled Left, Right And Center On Twitter After Yet Another Failure

IND vs NZ: Rishabh Pant Is Getting Trolled Left, Right And Center On Twitter After Yet Another Failure

Indian keeper-batter Rishabh Pant, who has been struggling to score runs in the white-ball format of the game, continued with his lean form as he once again failed to make a big impact with the bat. As the game kickstarted the Shikhar Dhawan-led side was asked to bat first. India needed Pant's heroics to consolidate along with Shreyas Iyer after half-centurions Shikhar Dhawan and Shubman Gill were dismissed in quick succession.

Rishabh Pant walked in to bat at no.4 for India. He took his time but he was unfortunate as he tried to pull a delivery from Lockie Ferguson that was not there to be pulled. He was dismissed after scoring 15 runs off 23 deliveries before chopping one onto his stumps in the 33rd over. Rishabh Pant looked visibly upset as he was walking back to the dressing room as he failed to make use of another good opportunity in the ongoing tour of New Zealand. 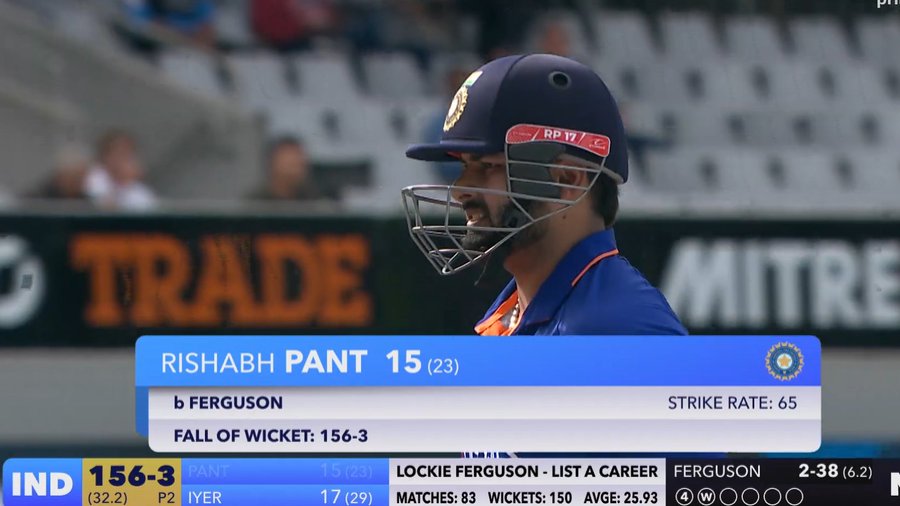 Earlier, Pant endured a forgettable time in the T20I series against the Kiwis as he could only manage to score 17 runs in the 2 T20is of a recently-concluded 3-match series against New Zealand. Pant was asked to open the innings for the Indian side in the T20Is but he failed to get going and was seen struggling badly to score runs.

Though, he has been going through a lean patch in the shortest format of the game, Pant's numbers in the ODI format are impressive. In his previous innings in ODI, he scored a match-winning 125 off 113 balls against England in Manchester, which was also his first ODI hundred. Pant also smashed a 50 against the Windies and a crucial 85 against the Proteas.

Meanwhile, fans on social media were left disappointed with Pant's performance and hence started trolling him left, right, and center on Twitter.

RIshabh Pant is doing injustice to his talent, should really not be playing T20I cricket at this stage. Needs to have a great IPL under his belt to regain confidence. #NZvIND

Indian team management seriously doesn't know what to do with Rishabh Pant, in white ball cricket.


Indian cricket has made Rishabh Pant a Virat Kohli who is also being given opportunities like Virat Kohli. How many more chances will Rishabh Pant get?@BCCI @mohsinaliisb @razi_haider @vikrantgupta73


#RishabhPant doesn't deserve a place in either T20 or Odi . Unless he performs exceptionally in Vijay hazare or SMA in domestic games. #IshanKishan can score more freely, forget comparison with #SanjuSamson


Also, what makes #RishabhPant that special that he's an automatically being seen as a future Captain/VC contender? If I'm not wrong, it was Shreyas Iyer who turned around DC & he lost captaincy to Pant due to injury in IPL. https://t.co/zXbWdyZhQn

Meanwhile, despite Pant's early exit, India managed to post 306 for 7 in 50 overs, thanks to the fifties from Gill and Dhawan and a terrific 80 from Shreyas Iyer.

Check out the playing XI of both India and New Zealand: