IND vs NZ:&nbsp;Suryakumar Yadav Gave An Epic Reply When Asked About Test Call-UP

In the absence of Virat Kohli, Rohit Sharma, and KL Rahul, India's numero uno Suryakumar Yadav made a mockery of New Zealand's world-class bowling attack on their soil on Sunday. Surya continued with his stunning T20 World Cup 2022 form as he stamped his authority at Mount Maunganui's Bay Oval. Playing a blistering knock for the Hardik Panday-led side, SKY ended up registering his second T20I century in 2022.

He played a terrific knock of  111 not out off 51 balls, which was laced with 11 fours and seven sixes. Suryakumar was also named the Player of the Match for his batting masterclass. He shattered multiple records while registering his second T20I ton to help team India take a 1-0 lead in the three-match series.

After guiding the Indian side to a famous win over the Kiwis, Suryakumar Yadav was asked about his much-awaited debut in the longest format of the game. Responding the hot question, SKY said: "Aa raha hain, woh (Test selection) bhi aa raha hain (coming, that is also coming," 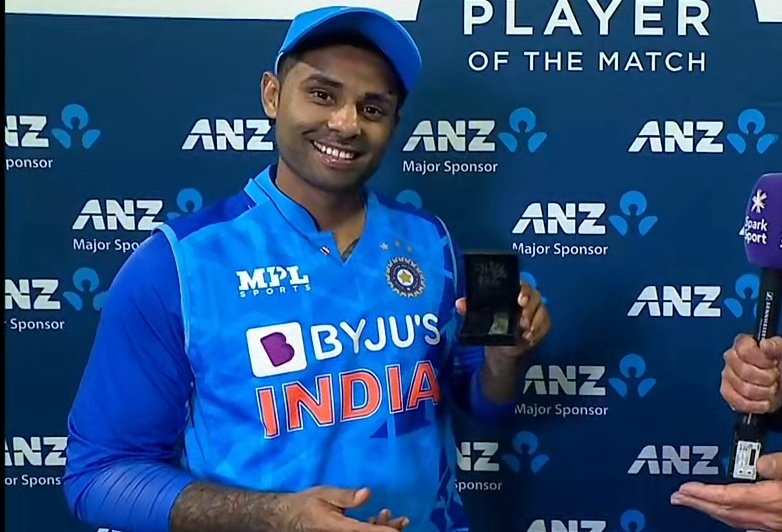 "When we start playing cricket we start with red ball and I have also played first-class cricket for my Mumbai team... it was quite okay, so I have a fair idea about the Test format and I enjoy playing that format also. Hopefully, I will get the Test cap soon," Suryakumar said at the post-match press conference.

Notably, Suryakumar, who recently became the top-ranked batter in the shortest format, has only played 13 ODI matches and 41 T20Is for team India. The Mumbai Indians (MI) superstar made his international debut against England at the Narendra Modi Stadium last year.

“I always keep going back to my past. When I am in the room, or travelling with my wife, we keep talking how the situation was two-three years ago. What is the situation now, what has changed now from then, we keep discussing that time. Obviously there was a bit of frustration that time but we always tried to see if there was something positive I could take out of that phase. How could I become a better cricketer, how to go one step ahead,” Suryakumar added.