Indian opening batter KL Rahul continued with his disastrous form in the ongoing T20 World Cup 2022 for the Indian cricket team as he got out for another low score in a big match. In the Super 12 clash between India and Pakistan, Rahul was cleaned up for just 4 off 8 balls by a brilliant delivery from Naseem Shah. In India's second game against the Netherlands, KL Rahul failed again with the bat. He was dismissed by LBW Paul van Meekeren after scoring just 9 runs.

After back-to-back poor performances, the Indian team management and captain Rohit Sharma showed their faith in him and backed him for the ongoing game against South Africa, however, to everyone's dismal, Rahul failed to perform once again. The flamboyant batter struggled to get going on a bounce Perth surface as he was dismissed by Lungi Ngidi for just 9 runs.

Before the game kickstarted,  Rohit Sharma won the toss and elected to bat first against South Africa but it didn’t turn out the way he expected. The Indian side started with the worst possible note as Parnel bowled a top-class first over where Rahul failed to score any and ended in a maiden. 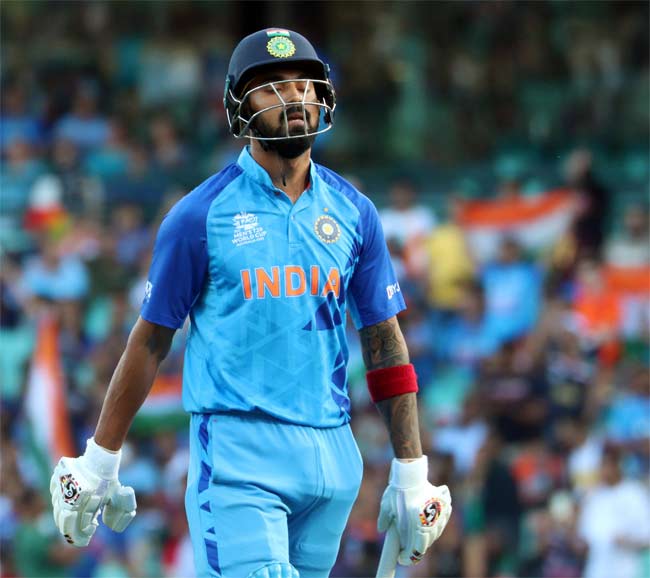 After a couple of tidy overs, Team India openers tried their best to take on the bowlers as both Rohit and Rahul smashed a six each. However, Ngidi ruined their plan as he first dismissed skipper Rohit for 15, and later, in the same over,  Rahul edged the ball at the slip to Aiden Markram.

Meanwhile, fans on social media were angered by another poor batting show by KL Rahul, who is now suffering the wrath of trolls.

Check out the reactions of angry fans:

As i always said


Even the bowlers don't celebrate KL Rahul's wicket anymore. What a fraud player he is!!

Even the bowlers don't celebrate KL Rahul's wicket anymore. What a fraud player he is!!

India is playing with 10 players and 15 overs. Thanks to KL Rahul

After eating 1 over!.. Indian people to KL Rahul #INDvsSA pic.twitter.com/3ma3turVIA

Can someone logically explain how KL Rahul and Deepak Hooda are picked ahead of Rishabh Pant?

Rahul is in terrible form, while Hooda has always been inept against pace on lovely pitches.

India has a knack of botching up team selection in big tournaments. #INDvsSA #T20WC2022