IPL 2023: This Conversation Between Suresh Raina And Ravindra Jadeja Is Pure Gold

IPL 2023: This Conversation Between Suresh Raina And Ravindra Jadeja Is Pure Gold

All the rumors of an alleged rift between all-rounder Ravindra Jadeja and Chennai Super Kings were put to rest on Tuesday after the four-time IPL champions -- Chennai Super Kings announced his name as one of their retained players for the 2023 edition of the Indian Premier League.

Ravindra Jadeja endured a forgettable season in the 2022 edition of the Indian Premier League with CSK.  Jadeja was first announced as the skipper of Chennai Super Kings, which was a major transition from the legendary MS Dhoni. However, things didn't go as planned, with CSK suffering back-to-back defeats at the start of the season. Following this, Jadeja eventually gave up his captaincy duties mid-season and MS Dhoni returned back as the captain of the franchise. Jadeja played under MSD for a few games but was injured in the last leg of the tournament, owing to a rib injury.

Ahead of the retention process, there were reports of alleged differences between the CSK management and Jadeja after IPL 2022. Putting all the rumors to rest, Jadeja took to his social media and shared a picture of himself with MS Dhoni. Sharing the picture, Jadeja wrote: "Everything is fine". Jadeja accompanied it with a yellow heart and #restart.

The Instagram post went viral in no time and was flooded with amazing reactions from the fans. While, CSK replied to the post saying, “Always and Forever!”, however, it was the reaction of former Indian and CSK star Suresh Raina's reaction that left everyone in awe. Suresh Raina was one of Dhoni’s most trusted men for years and he played an instrumental role in CSK's success in the IPL over the years.

Check out the comments: 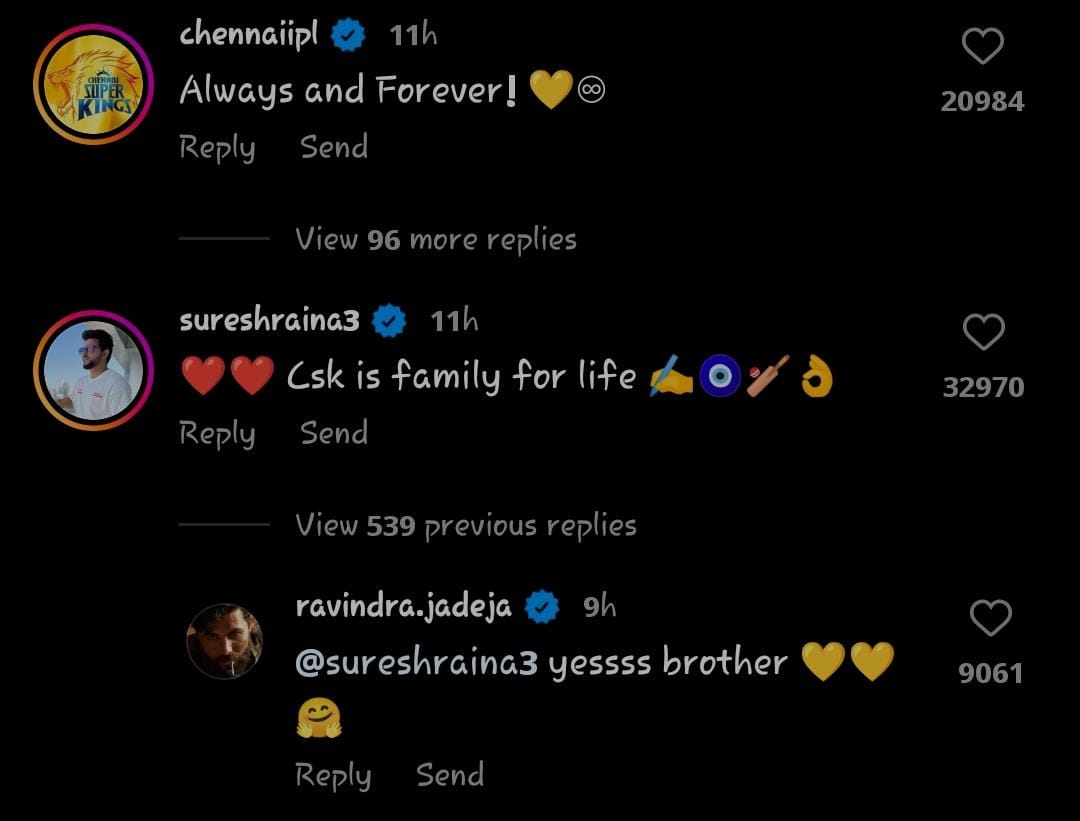 Raina's reply became an instant fan favorite as it showed his love and connection with the Chennai-based franchise despite not being a part of the squad anymore. Suresh Raina was one of the  most prominent absentees from CSK’s retention or auction list during the mega-auction of the 2022 edition of the Indian Premier League.