Kris Srikkanth Made A Big Prediction About Virat Kohli

For the unversed, former Indian cricketer Gautam Gambhir played brilliantly throughout the ICC Men’s Cricket World Cup 2011 and played a key role in India's victory in the marquee tournament. He scored 393 runs in 9 games at an average of 43.66 and a strike rate of 85.06, including 4 half-centuries. In fact, in the final match against Sri Lanka, Gambhir played a stunning knock of 97 runs, which is hailed as one of the most memorable knocks in Indian cricket history.

Meanwhile, speaking to Star Sports, Kris Srikkanth reminisce about the iconic World Cup 1983 and 2011 World Cup wins and hailed the performance of Gautam Gambhir in the tournament of 2011. He also expressed that he is proud of Gambhir for his performance in the marquee event. He said:

“What a great feeling it was, to win the 83’ World Cup as a player and then to be chairman of selectors of the team, which one the 2011 World Cup is a story I can tell my grandchildren."

He added: “First of all, the knock played by Gautam Gambhir was phenomenal, that too in the World Cup, congratulations to him, I am proud of him. Superb batting throughout the series. I am making the prediction that Virat Kohli will show us the same heroics in the 2023 World Cup,” 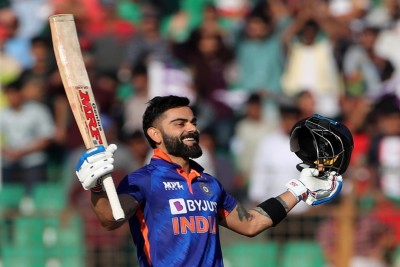 Furthermore, Srikkanth said that Virat Kohli will play a major role of an anchor just like Gautam Gambhir did in the past. He hailed Ishan Kishan's double century, which he had registered while having a remarkable partnership with Virat, against Bangladesh. Srikkanth said that Kohli will help the youngsters like Kishan to excel. He also said that team management should give the freedom to the players to express themselves. He said:

“Just like Gautam Gambhir has played a major role of anchor in the past, the same way Virat Kohli will play that role this time around. He will help players like Ishan Kishan excel just as he got a century when Kishan got a double century.

“It’s all about freedom, giving your players the freedom, do what you want, play your game even if you get out, that’s the approach the team should have,”