Indian middle-order batter Suryakumar Yadav once again stole all the limelight with his powerful performance in the ongoing series decider 3rd T20I against Sri Lanka at the Saurashtra Cricket Stadium in Rajkot. Walking out to bat at number 4, Surya reached the milestone in just 45 balls on Saturday (January 7) in the 3rd T20I match against Sri Lanka.

Coming out to bat first, the Indian cricket team lost Ishan Kishan early but Shubman Gill and Rahul Tripathi went all over Sri Lanka bowlers. Once Rahul Tripathi was dismissed, SKY walked out with all guns blazing and took the game by storm. While the non-strikers kept losing wickets, playing short cameos, Surya remained fixed. He remained unbeaten till the end of the innings. He played a stunning knock of 112* runs off just 51 deliveries and made the Indian cricket team post a mammoth total of 228 runs on the scoreboard.

With this century, SKY has become only the fifth batter to reach the century for the third time in his career. While Indian captain Rohit Sharma has four centuries, SKY has joined  Czech Republic's S Davizi, New Zealand's Colin Munro, and star Australian all-rounder Glenn Maxwell with three tons in the T20I format. 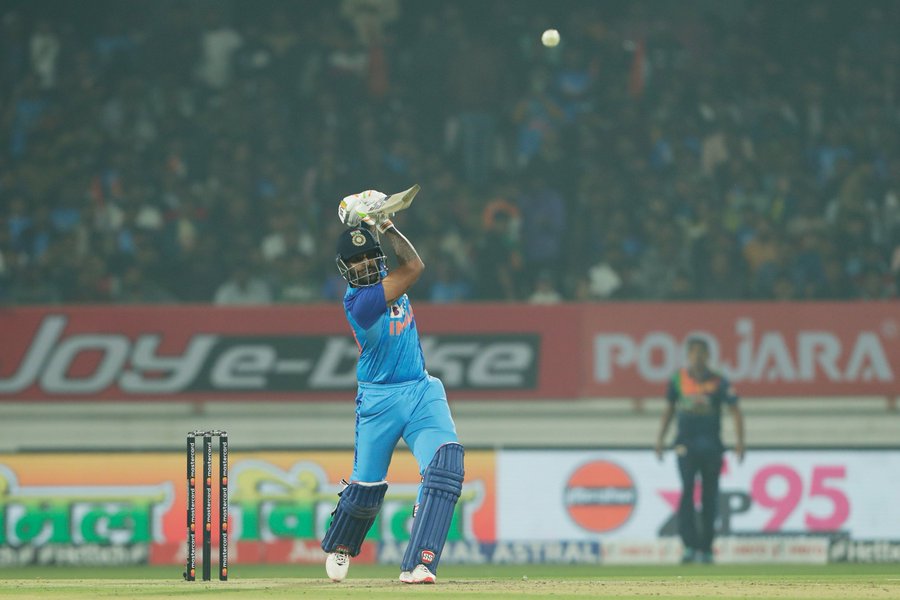 Check out the list of batters with the most centuries in t20I format:

Surya is also one of the 6 Indian cricketers to reach a century in the shortest format of the game. Interestingly and incredibly, SKY's all three centuries have come within a space of six months. His first century came against England in July and 2nd against New Zealand in November.

Apart from this, Suryakumar Yadav created another record as he completed 1500 T20I runs in just 843 balls, the fastest of all players. Yes, SKY also became the second-fastest India to score a century. He reached the triple-figure mark in just 45 balls. The fastest to reach the milestone is Rohit Sharma, who took just 35 deliveries to complete his ton vs SL in Indore in 2017. He is followed by KL Rahul’s knock vs West Indies in 2016 which took 46 balls.

Check out the list of Indian Men players to score T20I hundreds: