PAK vs ENG Final: Babar Azam Is Getting Mercilessly Trolled As He Failed Yet Again With The Bat

PAK vs ENG Final: Babar Azam Is Getting Mercilessly Trolled As He Failed Yet Again With The Bat

Pakistan captain Babar Azam once again failed to perform with the bat as he was dismissed cheaply by England's Adil Rashid in the all-important final of the ICC T20 World Cup 2022 at the Melbourne Cricket Stadium on Sunday. It was a must-win match and Pakistan put up a dismal batting display during the high-stake T20 World Cup final.

The Men in Green were sent in to bat first, however, Pakistan could only score 137/8 in 20 overs with Azam scoring a 28-ball 32 while opening the innings with Mohammad Rizwan, who disappointed as well with 15-run knock. Babar Azam smashed two boundaries, however, he was sent back to the pavilion after scoring 32 runs in 28 balls. Azam was the second highest contribution on the day after Shan Masood’s 38 (28) while Shadab Khan was the next best with a 14-ball 20.

Azam was dismissed at a crucial juncture of the game as he was dismissed by Adil Rashid (2/22) in the 12th over when the Pakistan opener played an uncharacteristic half-hearted cross-batted stroke, only to get caught.

Entering the T20 World Cup as the top-ranked batter in white-ball cricket, Babar has failed to fire for Pakistan in the just-concluded T20 World Cup 2022. Babar Azam's batting SR in 2022 men's T20 WC: 93.93. He could only amass 124 runs in the entire tournament. It was indeed a disappointing World Cup with the bat for Pakistan's captain. 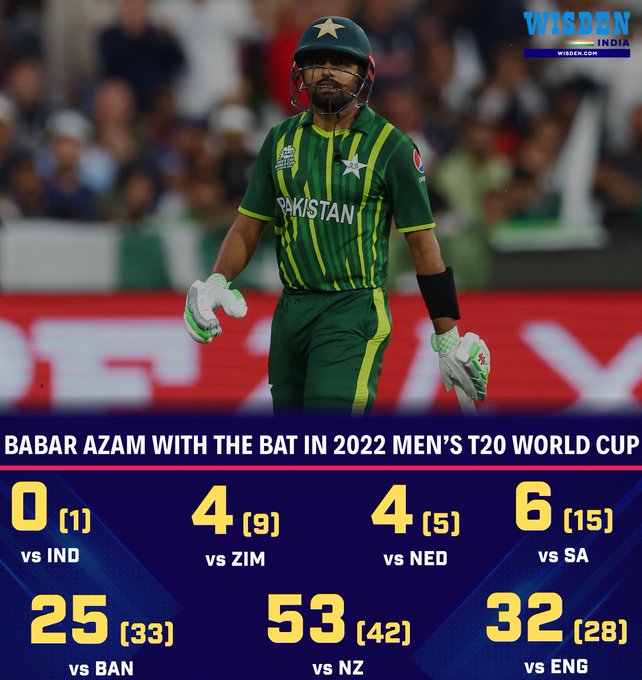 Meanwhile, as soon as Babar got out, cricket fans started trolling Babar for his poor show in the T20 WC 2022. Fans are trolling him left, right and center with the help of hilarious memes and jokes.

Babar Azam can only dream of
Playing such a knock at the age of 25 in the T20 WC finale 🐐🔥#PAKvENG pic.twitter.com/gITURGjkmB

Whoever made this PATHTIC Pitch receive this 🤬🤬🤬
Babar azam chacha #PAKvENG pic.twitter.com/SLtWAHexrD

Babar Azam is back in the pavilion. Pakistan are in trouble #PAKvENG pic.twitter.com/3skwlHoCY2