India's talented player Sarfaraz Khan, who was ignored for the upcoming first Two Test matches against Australia, has sent another strong reminder to the selectors by smashing a memorable century on Day 1 of the Ranji Trophy fixture against Delhi.

For the unversed, the selectors picked the team for the first two Tests against Australia, but Sarfaraz’s name was missing. His absence from the squad created a lot of uproar on social media with his fans slamming the BCCI for overlooking a talent like him. 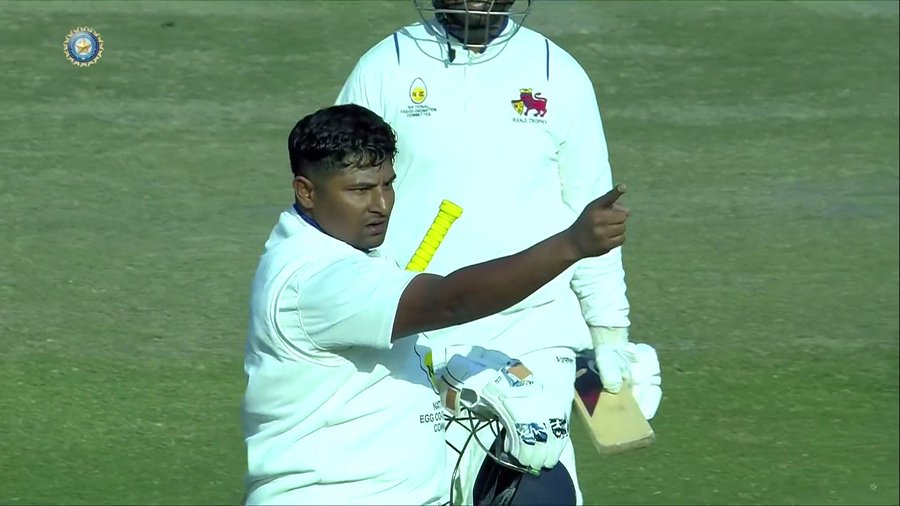 Playing against  Delhi at the Feroz Shah Kotla, Sarfaraz Khan smashed a stunning century. He walked in to bat at 62/3 when Mumbai was in a bit of trouble having two quick wickets. Sarfaraz build partnerships with the batters at the other end and brought the momentum back to the innings. He completed his century off just 135 balls as he took Mumbai to safety after they were reduced to 110/5.

Meanwhile, as soon as Sarfaraz smashed another century, social media was flooded with reactions from the fans. There were many once again demanding why he was dropped in the first place. Among many, senior Indian journalist and news anchor Rajdeep Sardesai also took to his twitter and shared a hard-hitting tweet regarding Sarfaraz Khan. He wrote:

"Delhi Vs Mumbai: yet another century by Sarfraz Khan. He now averages more than 80 in 1st class cricket, second only to legendary Bradman. Will any selector answer why he isn’t good enough to be in India squad? Why no press conferences by selectors to explain choices? @BCCI"

Earlier, after getting ignored by the Indian squad,  Sarfaraz admitted that he expected himself to get picked but was sad the whole day when he got to know that his name wasn't there while traveling from Guwahati to Delhi. He said:

"I'm bound to fail in the odd match or two. It's cricket, it happens. I'm not God. I can't score in every match. And I'm very fit. I played in every match till the last. I run fast. Everyone has a different body structure, you can't change it. I've cleared all the yo-yo tests in the past. Unless you clear the yo-yo test, you can't play in the IPL,"