India skipper Rohit Sharma was handed a golden duck by left-arm West Indies pacer Obed McCoy in the second T20I between the two sides, on Monday at Warner Park, Basseterre, St Kitts. Sharma, who had cracked a brilliant half-century in the first T20I – 64 runs off 44 balls in Trinidad a couple of days …

Sharma, who had cracked a brilliant half-century in the first T20I – 64 runs off 44 balls in Trinidad a couple of days ago – couldn’t even get his eye in today as he was dismissed for a first-ball duck on a pace-assisting pitch.

Rohit Sharma fails to get off the mark today

The game started three hours after its scheduled time – “Due to circumstances beyond CWI’s control, there have been significant delays in crucial team luggage arriving into St Kitts from Trinidad.”

And it was a pleasing one for the hosts but not for the visiting skipper. As India brought pacer Avesh Khan in the eleven for leg-spinner Ravi Bishnoi, it was an indication of what they were expecting from the surface. 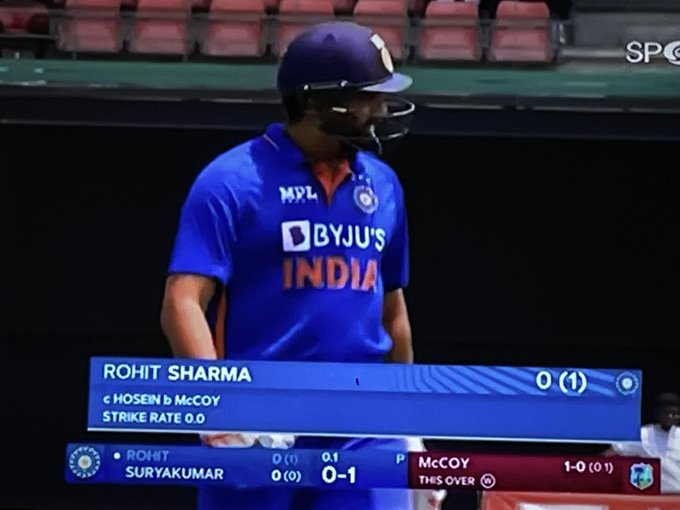 Rohit, then soon got a taste of it first-hand first ball as a back-of-length delivery from Obed McCoy bowled across the angle, sharply reared up into his body.

Failing to get to terms with the extra bounce so early in his innings, Rohit was neither forward nor on the front foot as he poked indecisively and could only get a thick outside edge that flew to Akeal Hosein at backward point where the fielder took the catch with both his hands stretched upward. Sharma had a wry smile on his face as he walked back.

Rohit Sharma was trolled on Twitter by fans who used memes and jokes to lament the skipper’s golden duck.

Here are some of the best reactions to Rohit Sharma’s first-ball duck:

Rohit Sharma goes for a golden duck. What a start by Obed McCoy.

Chamiya Rohit when he sees a left arm bowler

Last time Rohit Sharma took 10 balls to score a Duck. This time he took just one ball. Massive improvement in my books.

Rohit failing after one good knock per series
Paint me surprised

Meanwhile, India have continued to play their new brand of cricket – play attacking shots, target the boundaries and put the bowlers under pressure – however, that has resulted in a fall of wickets.

At the time of writing, India have lost four wickets for 61 runs in 6.3 overs. At this point, the overs or run rate is not a big issue, but the wickets left are. On this pitch, India would want to have something around 140-150 to make a match of it.