Former Pakistan captain Sarfaraz Ahmed must be riding high on happiness after making a sensational return to the Test side after almost four years. A few months ago, the prospects of Sarfaraz even playing for the Pakistan cricket team again were deemed done and dusted, however, he made a solid comeback in Test cricket as he smashed a remarkable century and stopped New Zealand's bid for victory on the fifth and final day of the second Test match on Friday.

Sarfaraz last played a Test match in January 2019, however, he lost his place in the national side following Pakistan's debacle in the  ICC Cricket World Cup in England, four years ago. Sarfaraz has since been part of the squad but didn't get the opportunity to play up till Pakistan was forced to bring him back. He replaced wicket-keeper Mohammad Rizwan, who has been enduring a lean patch in the longest format of the game. Sarfaraz made a comeback in the first New Zealand Test onwards and never looked back. He scored half-centuries in both innings of the first match, returning with scores of 86 and 53 before he finally broke his 9-year-long century drought in the second and final match of the series. After scoring 78 runs in the first innings, Sarfaraz scored his century off 135 balls with a crisp off drive against Matt Henry as the crowd present at the National Stadium Karachi cheered their hometown batter in the second innings. His stunning knock helped Pakistan save the match and hence the series. He amassed  335 runs in four innings and ended up winning the player of the series award as well.

As soon as Sarfaraz Ahmed reached the milestone, he produced an ecstatic celebration, punching the air as well as the ground, while the crowd celebrated with him. His teammates including skipper Babar Azam, opener Imam-ul-Haq, and the entire support staff also gave him a standing ovation. The video of Babar and Imam celebrating Sarfaraz's knock went viral on the internet.

There were many who criticized Babar Azam and PCB for not giving enough chances to Ahmed. Using the image from the video, one of the users alleged that Babar fake-praised the former captain after benching him since 2019. The tweet went insanely viral and was flooded with likes and rts. However, an interesting activity on it caught the fans' attention. Sarfaraz liked the tweet from the user. The screenshot of the same has been making rounds on the internet. Check it out: 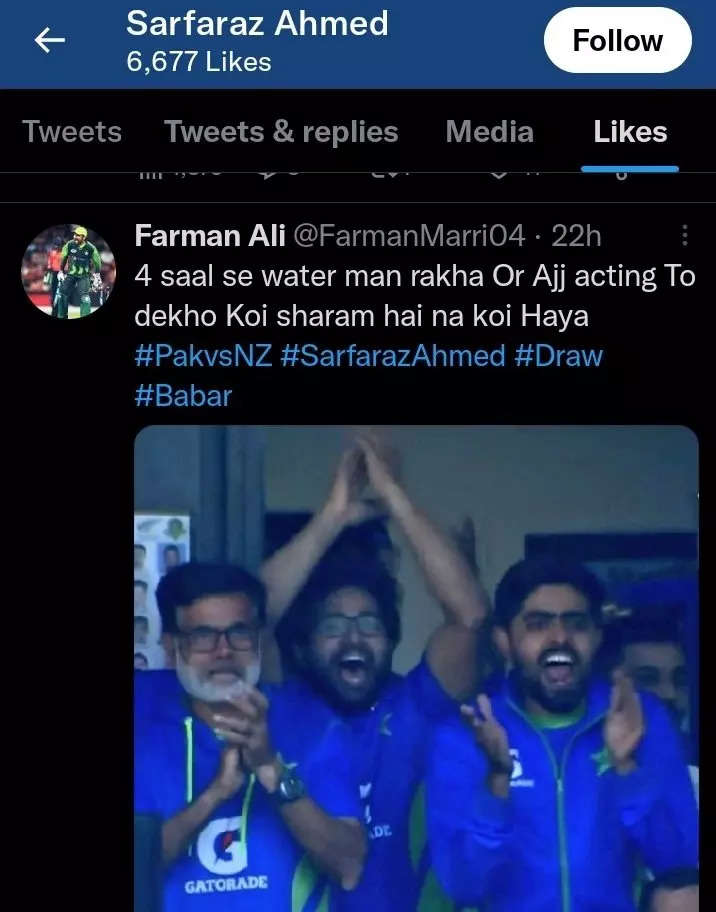