India's star all-rounder Hardik Pandya shared a heartfelt message for the fans on social media after the Indian cricket team suffered a humiliating defeat in the second semi-final of the 2022 T20 World Cup at the hands of Jos Buttler-led England cricket team. Hardik Pandya turned out to be India's brightest performer on the day when every other Indian player struggled in a game to lose the all-important game by 10 wickets.

After England won the toss and chose to bowl first at the Adelaide Oval, the Indian cricket team put up a score of 168 runs on the board. KL Rahul failed in yet another important match, while Rohit Sharma managed only 27 off 28 balls. Virat Kohli took 40 balls to get 50 at a strike rate of 125. But Hardik Pandya gave a major boost to the Indian side with his sensational knock. Hardik played a stellar knock of 63 runs in 33 balls, which included 4 boundaries and 5 sixes to help India make-up for a slow start.

However, Jos Buttler and Alex Hales started strongly with India bowlers having no answer to their sensational innings and defended the target of 168 runs easily. 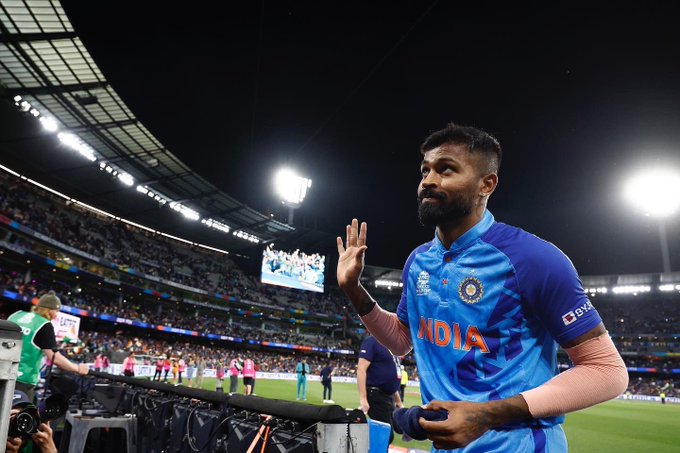 Indian bowling had a day to forget as they weren't able to take a single wicket. Hardik himself conceded 34 runs in 3 overs as Buttler and Hales smashed them to all the corners of the ground.

Later, after the match, a devastated and hurt Hardik Pandya took to his social media and wrote an emotional post, expressing his feelings after the semi-final exit. He wrote:

"Devastated, gutted, hurt. Tough to take, for all of us. To my teammates, I’ve enjoyed the bond that we built - we fought for each other every step of the way. Thank you to our support staff for their endless dedication and hardwork for months on end,"

He added: "To our fans who backed us everywhere we went, we’re forever grateful. It wasn’t meant to be but we’ll reflect and keep fighting,"

To our fans who backed us everywhere we went, we’re forever grateful. It wasn’t meant to be but we’ll reflect and keep fighting. 🇮🇳❤️ pic.twitter.com/smFBRuTd3J