England became the world champions in the shortest format of the game as they defeated Pakistan in the T20 World Cup 2022 final to lift their second T20 World Cup title. England became the second team after West Indies to win the men's T20 tournament twice. England's campaign in the T20 World Cup 2022 kickstarted with heartbreak as they suffered a defeat to Ireland. However, Jos Buttler's boys regrouped with renewed motivation and control of their fate. The Jos Buttler-led team made a strong comeback and won the prestigious cup.

Talking about the captain, Jos Buttler made an iffy start to his career as a full-time captain of England remaining winless in the first four series. However, he has impressed one and all with his growth as a captain in the last few months, and the same was displayed in the just-concluded marquee event.

Not just as a captain, but he was sensational with the bat too. He played some crucial knocks in crunch games. His leadership skills are being lauded by everyone for the way he carried all the players with him and the way he respects everyone in his squad and their beliefs. Something similar was seen after England beat Pakistan in the final by 5 wickets, during their celebrations. 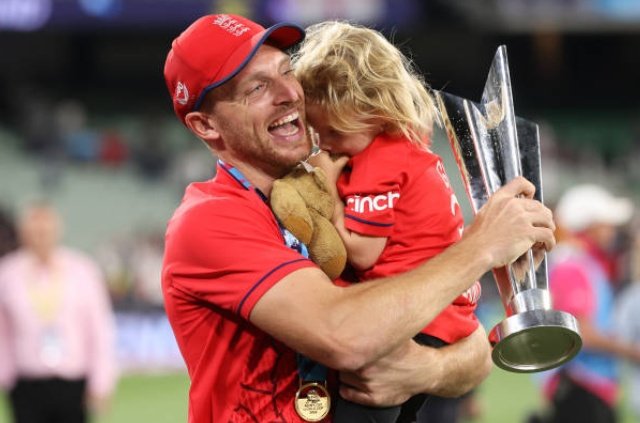 Well, what happened was Jos Buttler and his squad first lifted the trophy on the podium and had an elaborate celebration before moving towards the 'CHAMPIONS' board on the ground. The players posed with the trophy behind the banner. This is when Buttler respectfully asked Moeen Ali and Adil Rashid to step aside before other players broke into the champagne celebrations.

Respecting the faith of both players, Buttler reminded Moeen Ali and Rashid Ali that the team was going to start the champagne celebrations. He ensured that both players left before they popped the bottle open. The video of the same has gone viral on the internet.

England's captain reminded Adil Rashid to leave and checked to see that he and Moeen Ali had left before they celebrated with champagne. Respect. pic.twitter.com/y30bGRFyHG