The final match of the Super-12 stage between India and Zimbabwe at the MCG saw a blockbuster performance from the no.1 T20I batter in the world Suryakumar Yadav. The superstar batter was at his absolute best as he played scintillating innings of 61* runs off just 25 deliveries. His blockbuster cameo helped the Indian cricket team to post a daunting total of 186 runs in their 20 overs.

Rohit Sharma opted to bat first after he called it right at the toss. However, Rohit failed to convert yet another start and fell for just 15 runs in the fourth over of the match. But KL Rahul, who was going through a rough patch, took over from where he left off in the last game and notched up a brilliant half-century.

The Indian side was in a commanding position before in-form Virat Kohli was sent back to the pavilion and he was followed by KL Rahul in the space of four deliveries to disbalance India's momentum. 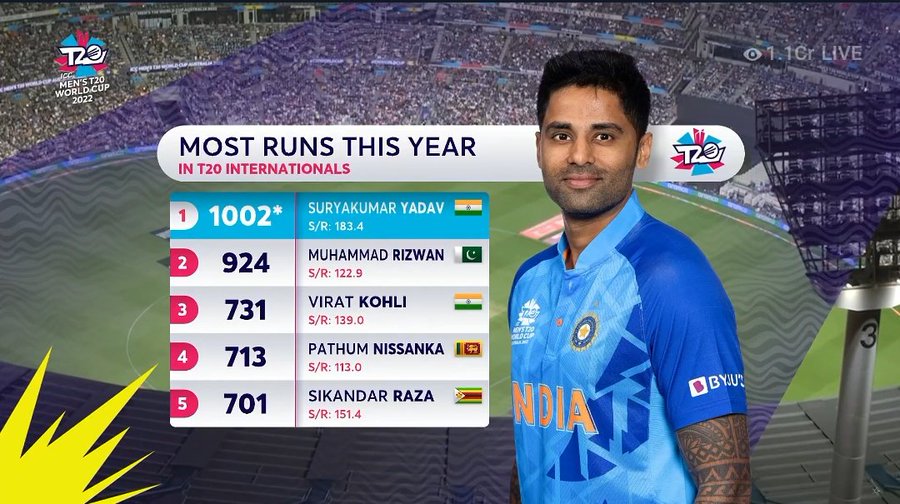 Rishabh Pant, who replaced Dinesh Karthik, failed to perform as he fell cheaply. This is when Suryakumar Yadav walked in and took the game by storm. He stood up for the side when it was needed the most, something which he has been doing since the turn of the year. SKY played some remarkable shots during his remarkable knock. is sensational half-century came in just 23 deliveries, making it the fourth fastest half-century for India in T20 World Cups. His stunning knock of 61 runs was laced with 4 sixes and 6 fours.

With this knock, SKY also completed 1000 runs in T20Is in 2022. He also holds the highest strike rate for a batter who has faced 100+ deliveries in an edition of the T20 World Cup.

Meanwhile, social media has been buzzing with amazing reactions hailing the brilliance of Suryakumar Yadav for his terrific performances. Among many, legendary Sri Lankan player Lasith Malinga, who has closely worked with Suryakumar Yadav in Mumbai Indians previously, also took to his social media and wrote the best Tweet for SKY.

In his Tweet, Malinga hailed this knock by SKY as out of this world. He wrote: "Out of this world stuff from SKY🔥👏  Why don’t you share the cheat code for batting with us @surya_14kumar?😉 #INDvsZIM #T20WorldCup"

Out of this world stuff from SKY🔥👏
Why don’t you share the cheat code for batting with us @surya_14kumar?😉 #INDvsZIM #T20WorldCup