The Indian cricket team is just two wins away from achieving their dream of lifting the ICC Men's T20 World Cup 2022 as they have successfully stamped their tickets for the semi-finals after a big victory over Zimbabwe. The Men in Blue entered into the semi-finals as group winners with a 71-run win at the Melbourne Cricket Ground.

Indian middle-order batter Suryakumar Yadav has played a crucial role in India's success in the ongoing marquee event.His performances in recent games have led him to gain the No. 1 spot in the ICC Men's T20I rankings. With a total of 226 runs in the competition so far which include three half-centuries, SKY is the second-highest run-getter in the tournament only behind teammate Virat Kohli. 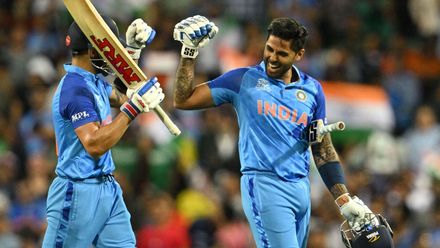 On Monday, he explained the reason behind his success as he admitted that he enjoys batting on fast, bouncy pitches and that Australian conditions were not a problem for him because he practices heavily on similar surfaces at Wankhede Stadium back home. He said:

"Everyone asks me that what are your preparations since you have never been to Australia. It has fast, bouncy pitches and big grounds. I have practiced a lot at Wankhede. The track there has a great bounce and is fast in nature. I have always enjoyed batting on these surfaces. I enjoy batting on big grounds since I see those big pockets and gaps, I hit the ball through them or run hard if there is a need,"

SKY said that he is currently enjoying his batting and only sees gaps while coming out to bat. He added: "I try to play the format. It is about the intent with which you come out. I try to get runs on every ball,"

From playing exquisite shots all around the park to excelling with the bat in the #T20WorldCup⚡️⚡️@ashwinravi99 interviews our very own 'Mr. 360' - @surya_14kumar 🙌 🙌 - By @RajalArora

The Indian side will now take on  England in the semi-final at the Adelaide Cricket Ground on Thursday (November 10).