Vikrant Gupta Gave A Befitting Reply To A Pakistani Journalist

It seems like Virat Kohli’s return to form hasn’t gone down well with some of his critics from across the border as a Pakistani journalist tried to troll Kohli following his century in Thiruvananthapuram. In reply, he got brutally trolled by senior Indian journalist Vikrant Gupta.

After undergoing three years of century drought in ODI cricket, Kohli has now cracked 3 hundreds in his last 4 ODI innings: in the 3rd ODI in Bangladesh, following up with hundreds in the 1st and 3rd ODIs vs Sri Lanka.

The latest one - a sizzling knock of 166* runs off 110 balls - came on a good pitch in Thiruvananthapuram, where along with Kohli’s century, Shubman Gill too smashed one of his own, scoring 116 runs from 97 balls, as India piled up 390 runs.

However, as it was proven later, the pitch wasn’t as flat as Kohli and Gill made it look like: despite the advantage of dew, Sri Lanka got bowled out for only 73. India sealed the series 3-0 with a gigantic victory margin - 317 runs margin is the biggest victory margin in the ODI history in terms of runs. 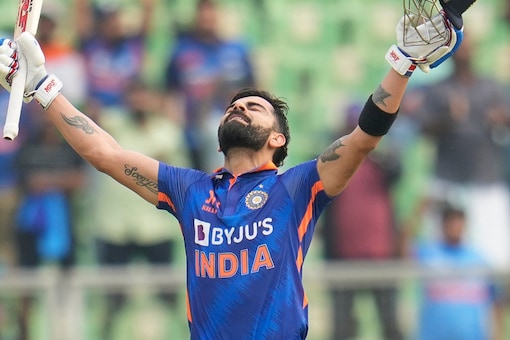 A Pakistani said that Babar Azam, who has 17 ODI tons, would have scored 25 ODI tons by now had he played on the flat track such as Thiruvananthapuram's where Kohli compiled his ton.

"If Babar Azam got to bat on these flat Indian tracks he’d have 25 ODI hundreds by now!" the Twitter user with id @hazharoon tweeted.

Irked by this statement, Vikrant Gupta replied back in style, saying that had the Indian batters played on the "roads" in Pakistan, all of them would have scored 10 more centuries.

"If Virat, Rohit, Pujara, Rahane would have batted on the ‘roads’ in Pakistan, they would have added 10 Test centuries each to their names," Gupta replied.

If Virat, Rohit, Pujara, Rahane would have batted on the ‘roads’ in Pakistan, they would have added 10 Test centuries each to their names https://t.co/Bif2dnwbwb

"For me, it's just a byproduct of the intent I have, mindset that I play with. Mindset is always to help the team win, bat for as long as possible and if you do that, you end up making a difference. I have always played for the right reasons, help the team as much as possible. It is just intent, playing for the right reasons. Ever since I came back from the long break, I have been feeling good. I don't have that desperation to get to a milestone. I am just enjoying my batting, being in a space where I can relax. Today as well, I was just happy to be out there batting," Kohli said at the post-match presentation.