Virat Kohli took all the social media trends by storm after he announced he would be on paternity leave from late December 2020 till January 2021. Kohli, who is married to Bollywood actress Anushka Sharma, returned back to India after playing the first of the four-match Test series.

Considering how uncommon it is for men, especially cricketers, to take paternity leave, Virat Kohli was brutally criticized by the fans and cricketers alike for leaving the test series in mid-way. However, Virat’s dedication towards being there during the birth of his child and afterward has set an example for millions of people out there.

The celebrity couple welcomed their baby daughter on January 11. The big news was announced by Virat himself. Virat had shared a note in Hindi and English on January 11 to announce the arrival of his daughter. He wrote:

“We are thrilled to share with you that we have been blessed with a baby girl this afternoon. We thank you all for your love, prayers and good wishes. Anushka and the baby are both healthy and we are feeling beyond blessed to start this new chapter of our lives. We hope that you can respect our privacy at this time. Love, Virat.”

The couple also beefed up the security while at the hospital and have been very particular about keeping their daughter away from the public eye. They requested the media to not click pictures of their child and also sent them luxury gift hampers. The message also stated that they would provide all the content related to their daughter at the right time.

Virat is leaving no opportunity to show-off his new status as a father on his social media. The Indian skipper recently updated his Twitter bio in an adorable nod to his baby daughter and his wife. His updated Twitter bio read: “A proud husband and father” 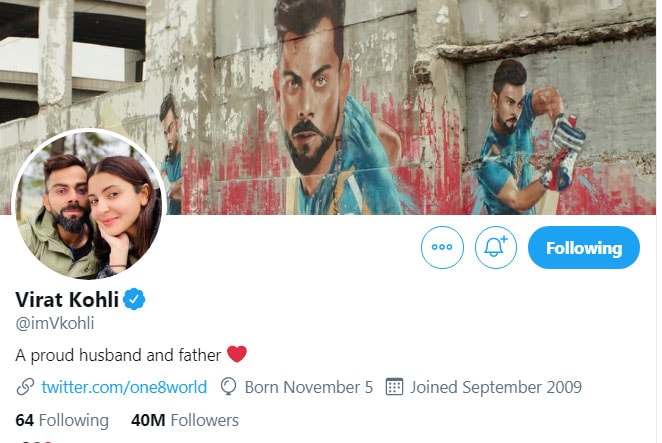