The Indian cricket team is currently taking on Sri Lanka in the ongoing 3rd T20I match at the Saurashtra Cricket Stadium in Rajkot. And as the Indian batting line-up was on fire in the 3rd T20I match, it was Suryakumar Yadav, who once again stole all the limelight with his stunning performance.

Suryakumar Yadav, who has been the best T20I batter in the world for quite some time now, led the Indian batting line-up and registered his third century in the shortest format of the game. And he managed to do that in style by smashing the Sri Lankan bowlers to all the corners of the ground. During his knock, SKY played his typical shots, especially his signature scoops behind the wicket. However, there was one shot that left everyone's jaw open. 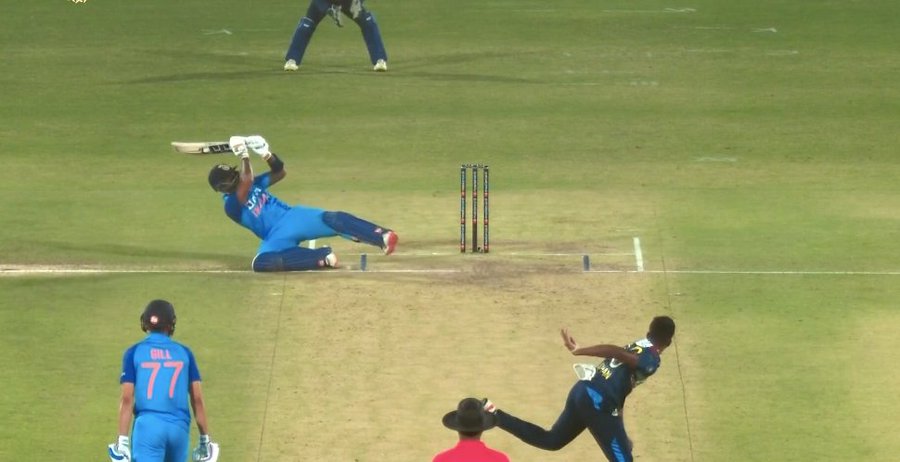 It happened on the 2nd ball of the 12th over, which was bowled by Ashan Madhushanka. SKY went down on his knee and hit the ball straight behind the bowler for a stunning six. However, while attempting to play the stunning scoop shot, SKY lost his balance and fell down. But the ball still managed to go over the boundary for a six.

The video of the same has been going viral on the internet. Watch the video:

Talking more about his knock, SKY walked out to bat at number 4 after the dismissal of Rahul Tripathi and took the game by storm. While the non-strikers kept losing wickets, playing short cameos, Surya remained fixed. He had only one plan in his mind - to bat. He remained unbeaten till the end of the innings. He played a stunning knock of 112* runs off just 51 deliveries and made the Indian cricket team post a mammoth total of 228 runs on the scoreboard.