India’s ace spinner Axar Patel continued his brilliant run in Test cricket on the third day of the ongoing Test match between India and New Zealand. He has been in outstanding form in red-ball cricket and impressed one and all with his unbelievable skills and consistency with the ball.

The ace spinner bagged his fifth five-wicket haul in just seven innings. With this achievement, the Gujarat-born bowler has joined an elite list. He has climbed to the second position in the list of the most five-wicket hauls in the first four Tests.

Australia’s Charlie Turner is currently sitting on the top of the list with 6 wickets and is followed by Tom Richardson (England), Rodney Hogg (Australia), and Axar Patel, at second position with 5-wickets haul each.

Apart from this, Axar Patel has also jumped to the third position in the list of most consecutive 4-plus wicket hauls in the longest format of the game.

Muthiah Muralidaran (Sri Lanka) is on top of this elite list with Waqar Younis (Pakistan). Both the cricketers have bagged 9 each. At the second position, Charlie Turned is sitting with 8 and at the third position, with 6 four-fers each, are Johnny Briggs (England) and Axar Patel. 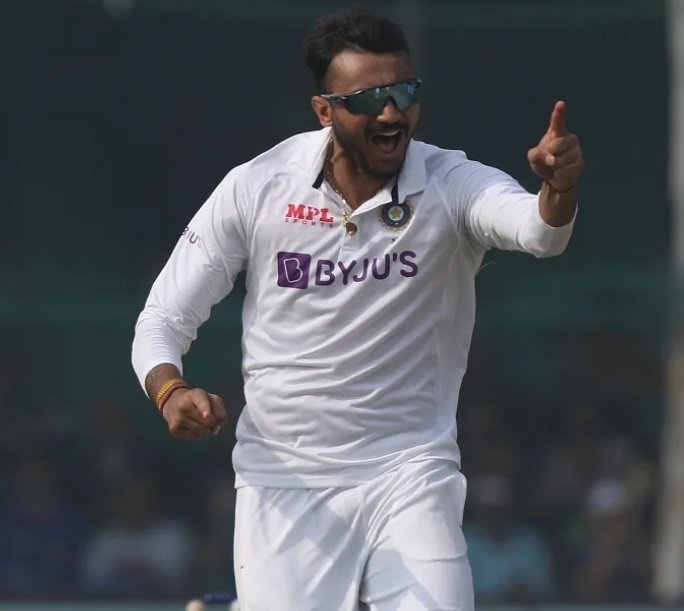 Talking about his performance, it turned out to be a great day for Axar as he got off the mark early on Day 3 of the ongoing 1st Test match against England as he picked the prized wicket of Ross Taylor on 11 runs to leave New Zealand at 214/3. Soon, he trapped Henry Nicholls and got rid of him on 2. His third target was Tom Latham, who was stumped brilliantly by KS Bharat on 95 runs.

In his next spell, Axar dismissed NZ’s stumper Tom Blundell on 13 and finally, he completed his fifer by sending Tim Southee back to the pavilion on 5 runs.

Ravindra Dismisses Ravindra For The First Ever In Test Cricket