Indian middle-order batter Suryakumar Yadav continued his brilliant form of 2022 into the new year as he produced another powerful performance for team India and registered the 3rd T20I century of his career.

Suryakumar, who has impressed the world with his batting skills, played another sensational knock of 112 off 51 deliveries against Sri Lanka in the 3rd T20I. His unbeaten knock of 112 runs was studded with seven fours and nine sixes. While he toyed with Sri Lankan bowlers throughout his knock, he ended the innings in style by hitting a six and a four off Chamika Karunaratne in the last over. All thanks to his knock, team India posted a massive total of 229 on the board. 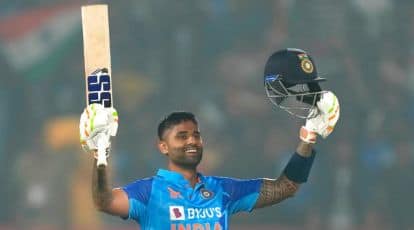 Meanwhile, Suryakumar Yadav has been receiving praise from all corners for his amazing knock that helped the Indian cricket team defeat Sri Lanka in the 3rd T20I and win the series by 2-1. Iceland Cricket via their official Twitter handle also joined the bandwagon and came up with an epic tweet.

In their tweet, Iceland Cricket hailed the brilliance of SKY in a sarcastic manner. Iceland Cricket wrote: "The problem with Suryakumar Yadav is that he is just a bit too good for this planet's bowlers."

The problem with Suryakumar Yadav is that he is just a bit too good for this planet's bowlers.

After his brilliant effort with the bat, Suryakumar Yadav talked about his performance and stated that he is not complacent about his sensational run in 2022 and starting the new year with a fresh start. He said:  "I'm really happy with the way the innings went. Captain winning the toss and batting first showed faith in the batters, few shots are pre-determined, but these are the shots I've been playing over the last year and I'm not doing anything different. The 2022 form is gone, it's a fresh start in 2023 and I hope to continue doing well. It's a good pitch, nice bounce and a lush outfield,"