List Of Last 10 Head Coaches Of The Indian Cricket Team

Indian cricket has grown leaps and bounds after the unfancied team led by Kapil Dev stunned the world and won the World Cup in 1983. Since then, the team has gone from also-rans to one of the best and most competitive sides across the globe. However, a team is only as good as its coach, and each coach over the years has their own little contribution to make sure that India slowly and surely improved on each and every front to become the juggernaut that they are today. Now not every coach appointed by BCCI was a success, but what is success without a few failures?

With that being said, let us have a look at the last 10 coaches and their record at the helm of the most important job in Indian cricket-

After a shameful exit from the 1996 World Cup semi-finals on home turf, the BCCI decided that they needed a coach who epitomized grit and determination, and they decided that former India cricketer Gaekwad was the perfect man to take over from Madan Lal and steer the ship from choppy waters.

Gaekwad's coaching stint went on for a little less than two years, in which he transformed the fortunes of the side in the ODI format, but he wasn't able to resurrect the fortunes of the team in the other format, which culminated in an absolutely horrendous Test tour of Australia in 1999, where they were blanked 3-0 with a shambolic performance in all departments. An under-par showing in the 1999 World Cup in England was the final straw, leading him to be shown the door.

The World Cup winner was thought to be the man to take this side to the next level and was roped in to replace Gaekwad at the helm in 1999. However, his stint as India's coach was an absolute disaster. Under his stewardship, India managed to win just a solitary test, at home vs New Zealand. And as was the norm in those days, India promptly got blanked 3-0 at Australia, and 2-0 at South Africa. However, his reign will be known for a much uglier reason.

It was under Kapil's reign that the infamous match-fixing scandal came to light, which threatened to derail Indian cricket. And it was at the height of this controversy that Dev decided to quit his post as coach, adding that he is "quitting the game that gave him a lot, but ended up taking away much more from him".

After a brief hiatus in the coaching job, India went to hire their first overseas coach in the form of former Kiwi international John Wright. And thus began the revival and recovery of Indian cricket in right earnest. Along with then-skipper Saurav Ganguly, Wright had a successful tenure as India's coach.

Under his guidance, India scaled a lot of heights that were previously not considered possible. The pinnacle of the reign had to be the historic 2-1 win in the test series vs Australia in 2001, which included THAT win at Kolkata. Further wins vs Pakistan in Pakistan followed, and a cinderella-like run to the 2003 World Cup final in South Africa.

After the high of Wright, came the astonishing low of Greg Chappell. From the time he took the job, it was very clear that there was friction between him and the players. His methods came under immense scrutiny and his relationship with skipper Ganguly deteriorated to the point of no return, after which he appointed Dravid as captain.

There was not much to talk about performances under Chappell, and with the embarrassing exit from the group stage of the 2007 World Cup in the West Indies, his tenure came to an ignominious end.

Rajput was not exactly a coach. He was given the title of Manager but had the same job description that a coach would have. While his tenure was brief, he was considered to be a calming influence on a predominantly young team and led them to victory in the maiden ICC T20 World Cup in 2007, a trophy India has not won since. 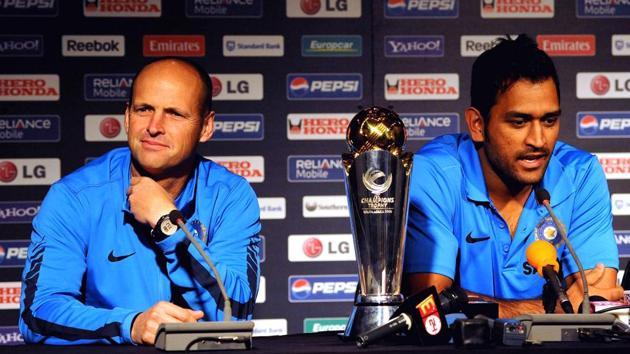 The third overseas manager of the decade, Kirsten entered the fray with the team in its cricketing prime and ready to take the next step toward dominating world cricket. And Kirsten did just that. Working in tandem with MS Dhoni, he won a test series in New Zealand for the first time since 1968, along with beating Sri Lanka away and Australia at home.

India displayed some of their best batting performances under Kirsten and that showed in their improved techniques and consistency. Kirsten capped his job with the biggest prize of them all, winning the 2011 World Cup on home soil, becoming the first-ever team to do it in the history of the tournament.

The Zimbabwean became the first coaching change of the new decade, with the expectation being that his hard-nosed style would take Indian test cricket to the next level. However, he had the worst possible start to his coaching stint possible, getting blanked 4-0 in both English and Australia.

After that, he managed to win 8 series in a row, which culminated in the 2013 Champions trophy victory. His tenure ended in 2015 with a semi-final exit in the 2015 World Cup in Australia.

The legendary leg-spinner was next at the helm. While he did not put a foot wrong in his tenure as head coach, he stepped down from the post less than one year into the job due to differences between him and captain Virat Kohli.

Under his coaching, India were practically invincible at home, beating New Zealand, Australia, England, and Bangladesh. India also beat West Indies away, but could not defend their Champions Trophy title in 2017, losing to Pakistan in the final.

Ravi Shastri was next in line for the coaching job. And it was under Shastri that India made a reputation of being fearless abroad, as India beat Australia twice at home, and were almost on the verge of beating England in 2021, taking a 2-1 lead before COVID hit the Indian camp.

The latest entrant on this list is Rahul Dravid. He started off promisingly by beating New Zealand at home but ended up losing to South Africa away after taking a 1-0 lead in that test series. He also was the coach in the 5th test vs England which India ended up losing, tying the series 2-2.

However, performances in the Asia Cup raised scrutiny, while Indias pathetic exit in the semis of the T20 WC blew things into a full crisis. The onus will be on Dravid to deliver in the 2023 WC which is in home conditions, or else it could very well be goodbye!!