Former Indian cricketer and world cup hero Gautam Gambhir has made a big demand for India's sensational batter Suryakumar Yadav after he produced another powerful performance to help the Indian cricket team defeat Sri Lanka in the 3rd T20I match. SKY produced yet another T20 batting masterclass with a 51-ball unbeaten 112 and powered India to 228 for five in the third T20I match against Sri Lanka. 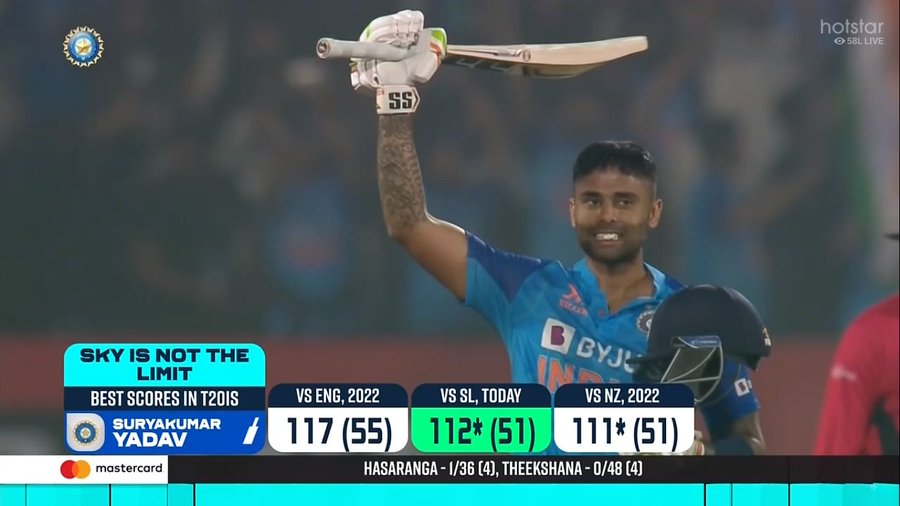 Suryakumar toyed with the Sri Lankan bowlers in his trademark manner all across the ground to register the 3rd T20I century of his career. After completing his half-century in just 26 balls, SKY took only 19 deliveries to reach the triple-figure mark. His stunning knock was laced with seven fours and nine sixes.

After the ton, while fans lauded Suryakumar Yadav, India's world cup hero Gautam Gambhir made a big demand for Surya. In his Tweet, Gambhir praised SKY for his blistering knock and also backed him to make it big in the Test format now. Gambhir wrote:

"What a knock @surya_14kumar! Time to put him in test cricket! #SKYscraper"

What a knock @surya_14kumar! Time to put him in test cricket! #SKYscraper pic.twitter.com/tvvoRTXEwp

Well, after having tasted success in the white-ball format for the Indian cricket team -- he's the No1 T20I batter in world cricket-- several experts including Gautam Gambhir have backed Suryakumar for the Test format. In fact, a few weeks ago, when Suryakumar was asked about his thoughts on playing for India in the longest format of the game, SKY said:

"Yes, obviously, I've always dreamt of playing Tests for India as well. When you start playing cricket for your state, you start with the red ball. Gradually you get into the white ball team. I feel that this is the best format of the game, and I really enjoy playing it,"

Clearly, the Test format is also close to SKY's heart as well. He added: "When I started playing age group cricket and the Ranji Trophy, I played red-ball cricket only. At the start of my career, I slowly earned recognition through red-ball cricket. My white-ball (exploits) came later. The red-ball format is very close to my heart. I really enjoy playing it,"