Dinesh Karthik Asked Rahul Dravid “Who Is The Third Opener?”: Indian openers KL Rahul and Rohit Sharma are in the red-hot form currently, smashing back-to-back half-centuries as team India sealed a win against New Zealand in the second T20I in Ranchi on Friday. Rohit Sharma-led team India won the second T20I match by defeating New Zealand by 7 wickets to win the series by 2-0.

Both the openers smashed their 5th consecutive 50+ partnership as they guided their team to a victory in the 2nd T20I against the Kiwis. After the match, India’s veteran wicket-keeper and batsman, Dinesh Karthik heaped praises on the opening pair of the Indian cricket team for their terrific performances. 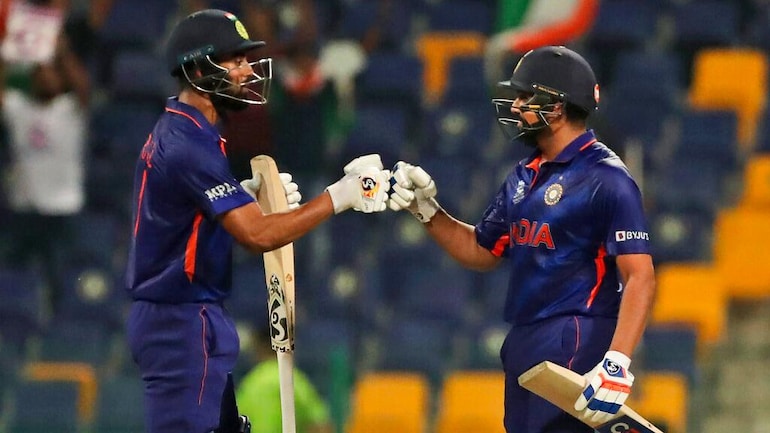 However, DK also asked a big question to the team management and the BCCI. Speaking on Cricbuzz, Karthik stated that the management needs to find a backup opener and also give him plenty of game-time. He said:

Rohit Sharma, who was recently appointed as the new T20I skipper of team India, played a crucial knock of 55 runs off 36 delivers before losing his wicket to Tim Southee. On the other hand, KL Rahul also played a stunning knock of 65 runs off 49 balls and was dismissed by Tim Southee.

Further, Karthik laid down some options for Rahul Dravid and labeled Indian cricket as having an “openers’ galore”. He said:

“Are you going to go to a left-hander which could be Ishan Kishan or Shikhar Dhawan, or go to another right-hander, whoever is batting best. It could be Ruturaj Gaikwad, you have Venkatesh Iyer. There are many options when it comes to openers, there’s you know openers’ galore in Indian cricket and Indian Premier League actually”,

“There are a lot of options, so which way are you going to go? These two are sorted. There is no question.”

“They have been batting brilliantly for a period of time and both of them are top of the runs in the ICC T20 ratings as well. So I don’t see any reason why they should be disturbed. In fact, I feel one of them should be given a break for the next game”, he further added.

Dinesh Karthik feels that India should find a backup opener for Rohit and Rahul. He asked Rahul Dravid about the third opener. He said:

“Look at your third opener, who is it going to be, you know. Go march in that direction. Find out who your third opener is. Make sure he is comfortable up until the World Cup where at any given opportunity where one of them is not playing, give him the opportunity to play and stick with him. Give him a good run and make sure he does the best for Team India”,